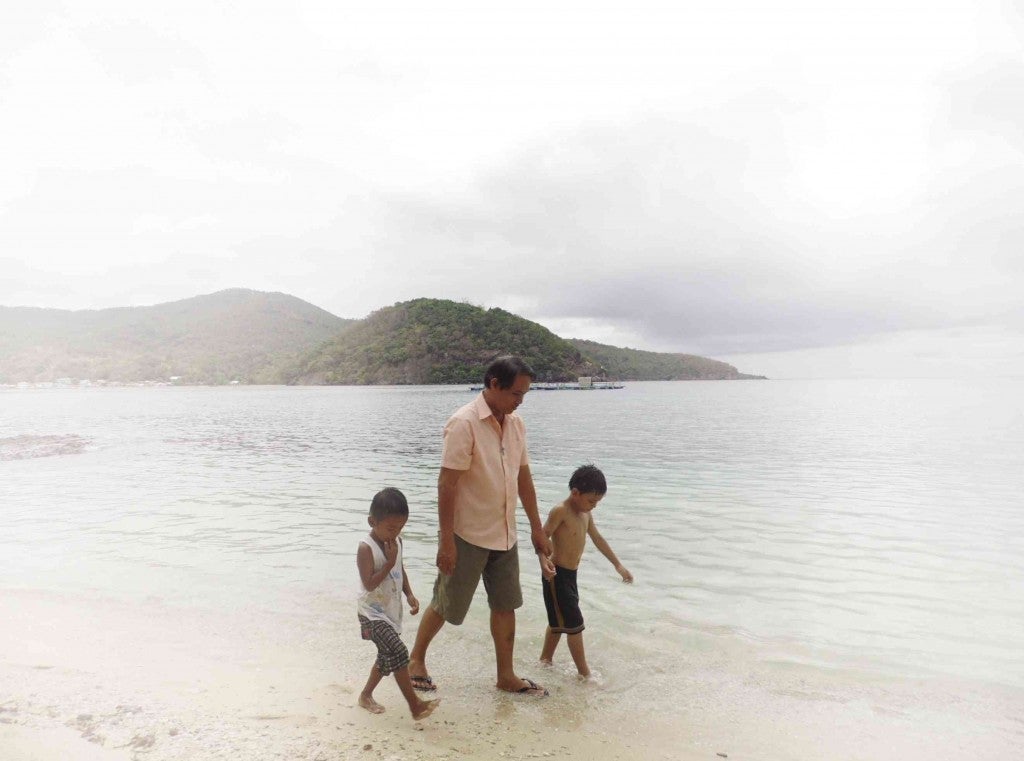 MAYOR Cipriano shows off Sibale Beach to a visitor from Manila, Rainier Soledad, 7, and a local boy.

Fishing and farming are the main livelihood of the population, who number around 5,000. From fishing, the workers would earn between P2,000 and P2,500 a month, which could go up to P3,000-P4000 if they were to work part-time as farmers. These earnings will depend on the weather. It will be dangerous, of course, to venture in rough waters.

“Kung masipag ka (if you’re hard-working) you earn more,” says Concepcion Mayor Limuel F. Cipriano, an economics and law graduate of the Far Eastern University and Manuel L. Quezon University, respectively, in Manila. He is also a member of Couples for Christ.

To the fisherfolk, Cipriano distributed 150 5-horsepower marine engines from the Department of Agriculture, with the local government subsidizing 50 percent of the cost.

“I’ll give you the engine provided you have the banca (boat),” the mayor told them. Fifty boats, along with fishing equipment from the Bureau of Fisheries and Aquatic Resources, were also distributed.

Ninety-eight percent of the island is planted to coconut trees, and copra is a major earner. Traders from Lucena City, Quezon, and from Pinamalayan regularly visit the island on buying-and-selling missions. The farm gate price of copra is P22 a kilo, with the traders deducting 15-18 percent depending on the moisture content of the copra meat.

If the workers were to forgo the services of middlemen and sell directly at the market, they would earn more—which is what resort owner Rimrod Yagaya does.

Additional income comes from two fish cages, each worth P125,000, in front of his beach resort which he inherited from his grandmother.

The budget resort has six cottages, which may be rented at P500 a day, more for divers (bring your own soap). There’s electricity at certain hours of the day. The property is worth P10 million, but Yagaya is not keen on selling it. He will, however, consider a 60-40 or a 40-60 sharing, depending on whether the investor is foreign or local.

Another of the municipal governments’ accomplishments is the electrification of all the 1,300 households on the island, achieved in 2011, which merited an award from the Department of Energy.

“Napocor is spending P23 just to produce one kilowatt,” says Cipriano. “We buy P9-10 per kilowatt, and we charge the customer P11.85 per kilowatt. The difference is subsidized by the main grid in Luzon. We are grateful. It is the people [in Luzon] who are helping us, not the national government.”

The mayor advocates what he calls an eco-agro-religious-tourism program.

“We cannot afford to build a hotel,” he says. “But we expect the influx of visitors once there is a fastcraft from Pinamalayan to Concepcion. Montenegro (Lines) is waiting for permission from the local government to construct a temporary ramp in Pinamalayan. No figure was given, but they have the capital and the logistics. They will earn.”

A dream of Cipriano is a Noah’s Ark on the summit of Mt. Banderahan, which is 430 meters high. He envisions a mountain trail with 365 steps, one for each day of the year; rain-harvested water to be served to guests; a conference room financed by the local government, and investments from outside sources.

“If ecotourism will prosper, there will be an increase in livelihood opportunities,” the mayor predicts. “And maybe, those high school graduates who leave [for college education and jobs] will come back to the island.”