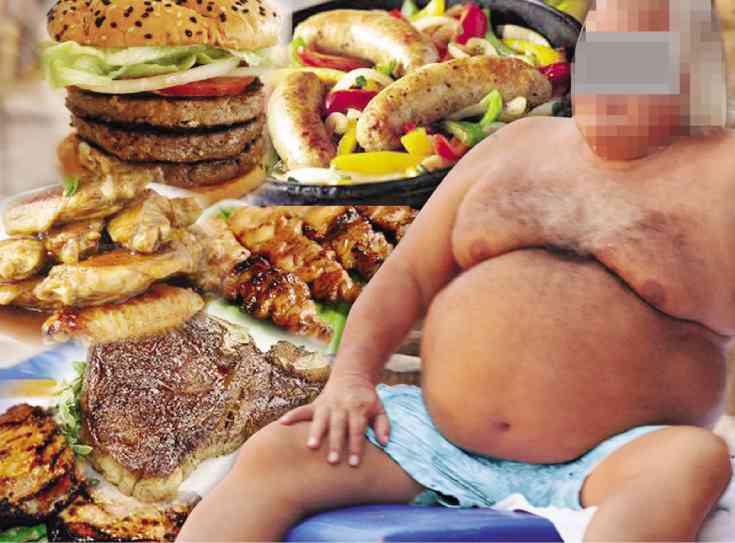 ASIDE FROM making you out of shape, high-fat diets are bad for the heart and other vital organs.

Often, the slowdown of the body’s metabolism has been blamed on inactivity or a sedentary lifestyle. Proof of this lies when the body does the opposite. Health experts have pointed out that increasing physical activity not only helps control stress and food cravings, but also speeds up metabolism.

And a slow metabolism doesn’t necessarily target only middle-aged people and older. It has been pointed out that lower metabolism combined with the unregulated consumption of high-fat snacks (unregulated meaning not keeping count of the amounts being consumed—for example, when consumption is done while being engrossed with watching TV) places children at high risk for obesity. And obese children are more likely to become overweight or obese adults.

Metabolism refers to the chemical processes that occur in our bodies in order to maintain life.

The Washington, DC-based Physicians Committee for Responsible Medicine (PCRM) issued an April 15 report citing a study published in Obesity that says a high-fat diet may change how your body processes nutrients. Researchers at Virginia Tech put 12 college-aged men on either a standard diet or a diet high in saturated fat for five days. Muscle biopsies were used to assess changes in insulin sensitivity. Those who consumed the high-fat diet experienced an almost three-fold increase in endotoxins one hour after their meal and lost some ability to metabolize glucose.

The study added that muscles’ ability to metabolize glucose is central to metabolism, insulin sensitivity and diabetes. This study builds on research which has linked fat inside muscle cells and high-fat diets to insulin resistance, which over time can lead to type 2 diabetes.

PCRM, in a related article, said that by avoiding animal products (pork, beef, chicken, fish, cow’s milk, eggs, cheese) and added oils, one would be able to keep total fat intake around 20 grams per day. To help meet this, PCRM advised the public to consume foods that have no more than 2 to 3 grams of fat per serving.

PCRM further recommends the links “Vegan Diet: How-to Guide for Diabetes” and “Vegetarian Starter Kit” (which explains the four new food groups, and offers useful tips, the “whys” and “hows” of a healthier diet, and easy-to-make recipes). Vegan diets, which contain no animal products (meat, dairy, eggs, and fish), contain no cholesterol and have less fat, saturated fat, and calories than meat-based diets or ovo-lacto vegetarian diets. Scientific research shows that health benefits increase as the amount of food from animal sources in the diet decreases, making vegan diets the most healthful overall.

“Some people imagine that pasta, bread, potatoes and rice are fattening, but the opposite is actually true. Carbohydrate-rich foods are helpful for permanent weight control because they contain less than half the calories of fat, which means that replacing fatty foods with complex carbohydrates automatically cuts calories. It’s important to remember to eat healthful carbohydrates, such as whole grains, pasta, brown rice and sweet potatoes. Processed carbohydrates, such as white bread and white rice, are not as healthful a choice because they have lost much of their fiber and other nutrients and tend to have a higher glycemic index,” said PCRM in its article “Frequently Asked Questions About Diabetes.”

Read Next
Breastfed babies have less chance of getting obese as they grow up
EDITORS' PICK
Senators call for stricter health protocols, swift vaccine delivery as COVID-19 cases surge
Smart reinforces superiority with best speed and mobile video experience in PH
TNT and TV5 team up to promote Pinoy pride to find PH’s biggest Pop Boyband
Neda chief speaks from experience, urges more, safer bicycle lanes
New COVID-19 cases exceed 3,000 for 4th consecutive day
Every Filipino home can now be a smart home with realme TechLife
MOST READ
Calbayog mayor ambushed on his way to son’s birthday party dies in hospital
Meghan says Kate made her cry before wedding to Prince Harry
Natalie Portman surprises fans after beefing up for ‘Thor 4’
Meghan says UK royals refused to make her son a prince due to skin color concerns
Don't miss out on the latest news and information.

Meghan says Kate made her cry before wedding to Prince Harry