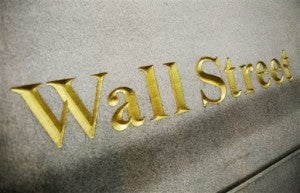 The Nasdaq exchange smashed its 15-year-old record Thursday, breaking through the old mark set at the peak of the dot-com boom in 2000. AP

NEW YORK—The Nasdaq exchange smashed its 15-year-old record Thursday, breaking through the old mark set at the peak of the dot-com boom in 2000.

A final-hour sell-off prevented the S&P 500 from surpassing its own previous record high of six weeks ago, but the markets overall polished off the session in positive territory.

“We finally took out the resistance area” after weeks of waiting for the Nasdaq breakthrough, said Peter Cardillo at Rockwell Global Capital.

But Facebook slid 2.6 percent as net income in the first quarter plunged 20 percent to $509 million, amid hefty increases in spending on research and share-based compensation.

Texas Instruments, another Nasdaq listing, sank 6.8 percent after projecting second-quarter net income of 60-70 cents per share, below the 73 cents forecast by analysts.

Dow member Procter &amp; Gamble fell 1.8 percent as net income for its fiscal third quarter dropped 17.5 percent to $2.2 billion, due in part to the strong dollar.

Time Warner Cable fell 0.6 percent on reports US cable giant Comcast will drop its plan to buy the company due to opposition from antitrust regulators. Comcast rose 0.8 percent.

Bond prices rose. The yield on the 10-year US Treasury fell to 1.95 percent from 1.98 percent Wednesday, while the 30-year dropped to 2.63 percent from 2.67 percent. Bond prices and yields move inversely.