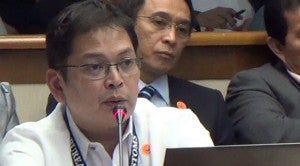 MANILA, Philippines—Alberto Lina received a surprise gift on his 67th birthday on Thursday—a return to his old post as

commissioner of the Bureau of Customs (BOC), just hours after John Phillip Sevilla told reporters he had resigned as the agency’s chief, citing “political pressure” with next year’s presidential election pretty much in the air along with the need to raise campaign funds.

The turnover ceremony will take place at 2:30 p.m. Friday, according to an e-mail from the bureau’s information office.

Later in the evening on Thursday, Executive Secretary Paquito Ochoa Jr. issued a statement that President Aquino had accepted Sevilla’s resignation and appointed Lina to replace him.

In a press conference on Thursday, Sevilla said he submitted his resignation to Aquino on Wednesday.

On Monday, he told reporters he had exceeded collection targets since taking over from resigned Ruffy Biazon in December 2013, denied news reports he was quitting and vowed he would not allow the agency to be used for raising funds for next year’s presidential election.

But almost a year before the 2016 elections, Sevilla said on Thursday, political pressure had mounted, which he could no longer bear.

Sevilla related that his troubles at the BOC started when he was just warming up to his new post one year and four months ago. He specifically mentioned the indigenous Christian congregation Iglesia ni Cristo (INC) that purportedly wanted its own people in key positions in the agency.

In June last year, the BOC released new guidelines on promoting personnel. According to Sevilla, he wanted to strictly implement the process put in place when promoting BOC officials. However, some groups were lobbying for certain personalities to be promoted, ignoring established procedures.

In September or October last year, he said he received feelers that the INC was pushing the appointment of Teddy Sandy S. Raval, chief of the BOC intellectual property rights division, to head the enforcement and security services (ESS).

But Sevilla nixed Raval’s move to the ESS, a director post whose appointment rests with the President. He said no one had told him about Raval’s qualifications or experience for the job.

Raval did not respond to the Inquirer’s e-mail asking for his comment. His staff said he was unavailable.

Edwil Zabala, an INC spokesman, said the group had no immediate comment on Sevilla’s claims.

Asked if he would take his oath of office at the Palace, Lina told the Inquirer, “Ipagdasal po natin (Let’s pray for this.)”

Lina served as head of the BOC during the Arroyo administration but resigned in July 2005 together with nine other top government officials at the height of the “Hello Garci” scandal—earning them the moniker “Hyatt 10,” a reference to the hotel where they made the announcement.

Finance Secretary Cesar V. Purisima was also among the “Hyatt 10,” and now heads the finance department, which oversees the BOC and the

‘Push is that strong’

“[I thought,] How come the push is that strong? I objected to that appointment. I said, ‘Look, I know that’s within the powers of the President, but I don’t agree that it’s a good idea.”

And then Sevilla received the news—“Very recently, I learned of the plan to go ahead with the appointment of Atty. Raval as director of ESS,” he said.

“It’s clear to me that whoever is pushing his appointment is powerful. There’s a strong push for the promotion of their men to very powerful positions here at the Customs. When these things happen, I become suspicious of their motives,” Sevilla lamented.

Things such as these eventually pushed Sevilla to give up his post, he said.

Sevilla said that every Monday morning at the bureau’s flag-raising ceremony, its personnel swear to “serve the public with utmost care, fidelity and promptness.”

He said he had sought to “uphold the time-honored principle that public office is a public trust.”

“I take these words seriously. I promised that there would be no politics or/and patronage system in the appointments in the customs bureau. I took that commitment seriously,” he said.

But ahead of the 2016 elections, Sevilla said he felt political pressure at play. “Politics is in the atmosphere. I could feel strongly political factors are moving in the background.”

“In the past months, it was increasingly becoming difficult. In the coming months, it will probably be impossible to (fight politics),” he said, explaining his resignation. “I am saddened that I could not finish what I had started.”

Last Tuesday, a BOC official, also a member of the so-called Customs “reform team” created by the Department of Finance to institute reforms at the agency, told the Inquirer to “watch for the mass resignation” of members of the group.

The official, who asked not to be named for lack of authority to speak to the media, named Sevilla and Deputy Commissioner for the Intelligence Group Jessie Dellosa as among those who would take part in the move to protest “goings-on at Customs” which were “contrary to President Aquino’s matuwid na daan crusade.”

These include the Malacañang-proposed designation of Raval as Intelligence Division chief allegedly upon the recommendation of the influential Iglesia ni Cristo.

“As early as last March, Executive Secretary Paquito Ochoa Jr. had been pushing for the appointment of Attorney Raval as Customs intelligence division chief. But both Commissioner Sevilla and Deputy Commissioner Dellosa defied him,” the official said.

Asked why Raval was not designated intelligence division chief, the official said, “Mainly because he has no military or police intelligence background. That would demoralize Customs intel and security personnel.”

The official disclosed “on Feb. 8, he met [with undisclosed number of] Customs players at the UCC Restaurant on Timog Avenue, Quezon City.”

During that meeting, Raval allegedly asked the traders and representatives of other groups doing business with the BOC to cough up an “additional ‘tara’ of P6,000 per container” supposedly to raise funds for administration candidates in the 2016 elections. “Tara” is the smugglers and port fixers’ term for grease money to facilitate the release of their mainly misdeclared and undervalued imported goods.

Raval allegedly claimed he arranged the meeting on behalf of two other customs deputy commissioners and had the blessings of Ochoa.

Sevilla and Dellosa “learned about that meeting from no less than some of the traders who attended the same meeting,” said the source, adding the bureau “has in its possession evidence that the meeting did take place.”

The Inquirer on Thursday tried but failed to reach both Ochoa and Raval for comment.

In a text message to the Inquirer, Speaker Feliciano Belmonte Jr. challenged Sevilla to support his claims of political pressure on him.

“Sevilla should speak up and not talk in generalities. Name names,” Belmonte said. “It’s unfair to the administration and officials like me who belong to the Liberal Party. Man up.”

Sevilla was the third BOC commissioner to resign under the Aquino administration, following Angelito A. Alvarez and Ruffy Biazon.

“We consider Commissioner Sunny Sevilla an honest, competent, no-nonsense professional whose departure will be a great loss to the Bureau of Customs and this administration. It is a sad day when principled professionals deem it untenable to stay in office,” MBC chair Ramon R. del Rosario Jr. said.

“We hope that Commissioner Sevilla’s successor will pursue the reforms that he has initiated in the bureau,” Del Rosario added.—With reports from Tina G. Santos, Gil C. Cabacungan and Riza T. Olchondra