AN ARTIST’S rendering of the booths the Department of Agriculture will put up at Madrid Fusion Manila.

Reading Inquirer’s food page last Thursday, I noticed that 70 percent of the articles were on Madrid Fusion Manila (MFM). April has become one huge fiesta with events promoting Spanish food in various restaurants and malls. (For skeds, see margauxlicious.com or the Lifestyle Guide to Madrid Fusion Manila by Raoul Chee Kee at http://lifesty le.inquirer.net/190580/lifestyle-guide-to-madrid-fusion-manila-a-fiesta-like-no-other.)

READ: Lifestyle guide to Madrid Fusión Manila–a fiesta like no other

But during the Madrid Fusion in Spain last February, the chefs who will speak at Madrid Fusion Manila on April 24-26 reveal that they are looking forward to discovering Philippine products.

“I would like to discover Filipino ingredients that I hope to use (in my kitchen),” said Chef Paco Torreblanca, one of Spain’s most celebrated pastry chefs. He was delighted when Chef Claude Tayag gave him a pack of pili nuts when he visited the Philippine booth at Madrid Fusion.

Elena Arzak, who will be speaking on Day 1 of the Congress, shares the same enthusiasm for discovery. Watching her receive the bottle of Manille liqueur I presented to her and her father, legendary Chef Juan Mari Arzak, at Restaurant Arzak in San Sebastian, I couldn’t help but notice that her beautiful Spanish eyes lit up. She looked like a kid who had found a new toy to play with. 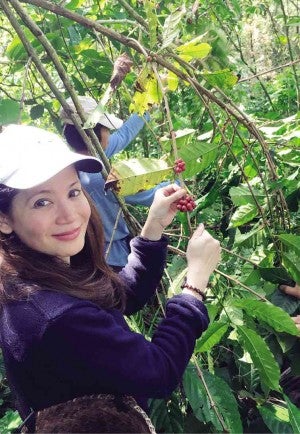 Berna Romulo Puyat of the Department of Agriculture

Chef Andoni Luis Aduriz of Mugaritz, currently No. 6 on the list of World’s 50 Best Restaurants, takes it a step further, seeking not only new flavors but products that represent Filipino culture.

He explains that a successful restaurant is “not just about good techniques but also about good products,” and that you need both to succeed.

He is in pursuit of unique flavors that reflect cultural identity.

“Sweet, sour, fermented products … these all have something to do with culture. These are the products I am curious about and want to understand,” Aduriz said.

I told him he would have to go to the Philippine countryside to experience this.

“Nah,” he replied smiling, “Chele (Gonzalez of Gallery Vask, who had worked at Mugaritz) will just bring them to his restaurant.”

Vask, in fact, has done its own research and will be presenting Gonzalez’s finds and interpretations during a dinner entitled “Kulinarya” on April 25, Saturday (for reservations, call +63917-5461673).

But a more expansive display may be found at the MFM halls. The Department of Agriculture (DOA), through the efforts of Undersecretary Berna Romulo Puyat, will be setting up several booths that will showcase the best of Philippine products and produce. There will be mangoes and coconuts, of course, but the list also includes products that even Filipinos are not familiar with.

An example is “adlai,” a tall, hardy, grain-bearing plant of the grass family that pre-Spanish Filipinos supposedly ate.

It may not be for mass production because the plant thrives in the highlands. But chefs will love the fact that it is a grain superior to rice and corn due to its higher protein and carbohydrate content. Chef Margarita Fores, in fact, loved the product so much upon hearing about it from Puyat that she used it in her presentation of Filipino food when she was guest chef of Hotel Ritz in Madrid last February.

The International Rice Research Institute (IRRI) notes that heirloom rice varieties are more flavorful, aromatic, and have exceptional nutritional value when cooked. Foreign chefs have actually been visiting IRRI on their own, looking for unique varieties of rice from the Philippines.

These varieties are extra special because they are grown on ancestral lands and harvested using age-old techniques passed on from generation to generation. 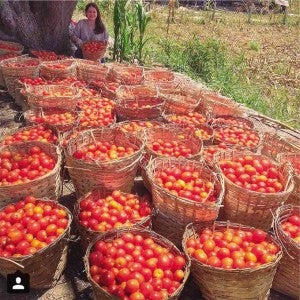 Berna Romulo Puyat of the Department of Agriculture

According to Puyat, 90 percent of farmers of heirloom rice are women.

“So, every time you buy, you not only help our women farmers, you also help save the rice terraces,” she said.

A Filipino produce that has been the darling of the international food scene lately is calamansi. The DOA will present this at MFM, along with the Manille line of lime liqueurs (calamansi and dalandan) now celebrated here and abroad.

At a recent visit to Singapore during the Asia’s 50 Best Restaurant Awards, I noticed that Osteria Mozza uses calamansi in their cocktails. Pizzeria Mozza executive chef Karla Mendoza shared that the wife of their cocktail master is Filipino and once brought Manille calamansi liqueur. They loved it so much that they have been making their own liqueur of fresh calamansi since.

The DOA will also be showcasing suha (pomelo), dalandan, sampaloc (tamarind), kamias, batuan, tabon-tabon and sua (markut lime). There will also be displays of cocoa and coffee from around the country.

Finally, as we anticipate the victory of Manny Pacquiao over Floyd Mayweather, the DOA will also be presenting tuna from General Santos, Manny’s hometown before claiming Saranggani as his residence.

As Puyat made her rounds to various provinces in search of products to showcase, she realized how “we have everything in the Philippines.”

The impact of the promotion of Filipino products to the world is huge. The agriculture industry accounts for 12 percent of the country’s gross domestic product (GDP), and employs 32 percent of the Philippine workforce. So, while the agricultural industry grew by 4.8 percent in the fourth quarter of 2014, it is important to continue pushing for greater growth.

For foodies, it may be all about flavor, but demand for Philippine products can translate to an increase in income for farmers and better quality of life for all. So as we rekindle our relations with Spain through recipes they left behind, let us also remember that this event is one great opportunity to promote Filipino flavors to the world.

Mugaritz’s Aduriz once told me something promising: “The Philippines will be the center of the gastronomic revolution in Asia.”

Read Next
Make a stand for clarity of corporate purpose
EDITORS' PICK
IATF to LGUs: Issue ordinances vs attacks on frontliners, COVID-19 patients
Diokno to Duterte: OK to make fun of buck tooth, but focus on people’s needs first
10 Filipinos positive for COVID-19 in UK, 7 in Ireland — envoy
Nograles: Cabinet members to donate 75% of monthly salary to aid COVID-19 fight
Robredo spox thanks Duterte for defending VP’s efforts vs COVID-19
Quick chat with Nicole Andersson: ‘You really don’t need much to be happy’
MOST READ
Coronavirus hotbed Rizal to shut borders on April 6
ADB warns PH against prolonged lockdown
Gov’t mulling quarantine period extension of 15-20 more days
‘Money Heist,’ ‘Tales from the Loop,’ ‘Killing Eve,’ ‘Never Have I Ever,’ ‘After Life’: Five not-to-be missed series this April
Don't miss out on the latest news and information.