Make a stand for clarity of corporate purpose 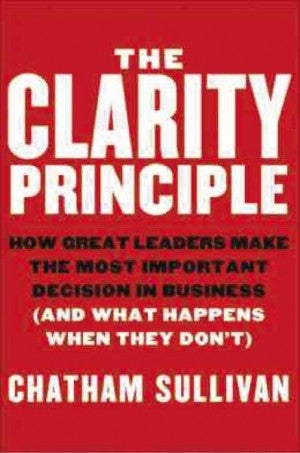 When a company is steering toward unclear directions, someone must be bold enough to confront a confused situation and tell the boss to take stock of what’s going on.

When top corporate leadership refuses to confront a “neither-here-nor-there” situation as the company sinks to lower levels of market performance, one must muster enough courage to point out the unfortunate impasse.

When the boy said the Emperor had “no clothes,” he told the truth others would not dare speak of, fearing the Emperor’s wrath.

The book, “The Clarity Principle,” calls it a “powerful leadership moment.” It’s that moment when truth is told against sacrosanct ill thought-out strategies and unchecked practices that push a firm into a sea of red ink.

Author Chatham Sullivan, who taught at the Wharton School of Business and the School of Social Policy at the University of Pennsylvania, calls for “more clarity in communicating the purpose” of the firm.

In the book, he mentions the conflict in policy between Steve Jobs and John Sculley, chair and president, respectively, in Apple Inc.

The root of the problem is traced by the author to the move of Jobs to split off the Mac division from the rest of the Apple business.

“Better to be a pirate,” Job was heard to have said, than join the navy. Jobs wanted “to free Macintosh designers from the bureaucracy of the larger organization.” As conceptualized by Jobs, he would handle Mac, while Apple II would be Sculley’s turf.

Calling Jobs’ act the “Mac insurgence,” author Chatham comments: “From the beginning, the conflict between the Mac and the Apple II had the potential to become a problem of existential proportions.”

Somehow, the conflict split Apple right down the middle. Before the tandem knew it, it was affecting decisions in manufacturing, inventory management and distribution. Apple’s market share plummeted between 1983 and 1985, from 45 percent to 25 percent. Meanwhile, a “proxy war” commenced.

Dubinsky thought that Jobs’ decision was a thoughtless and precipitate one, and she refused to give in. She spoke her mind “about what was really happening in Apple, a reality no one dared speak about.”

Chatham provides an insight in the book: The distribution plan defended by Dubinsky was actually a minor issue compared to the larger strategic problem of Apple at that time.

The confrontation led to a review of what’s happening at Apple, and further led to arriving at “a clarity of purpose” for the firm—which, expectedly, achieved a rebound with the Apple board seeing the light and Jobs coming back properly chastened to respect the value of such “clarity principle.”

Another big name in business and media is Cable New Network (CNN), established by Ted Turner. The author relates that in 1980, CNN was an “audacious enterprise.” It propagated the “CNN Effect”—the real-time, 24-four hour coverage of government decision-making.

CNN, according to Chatham, found a “galvanizing purpose in satisfying a powerful unmet need in the market: Constant coverage of global events in an increasingly globalized world.” But, something happened along the way. In the mid-1990s, CNN’S ratings fluctuated wildly.

Fox News overtook CNN in the ratings. It turned out, viewers wanted news, not in its pure form, but news with the points of view of broadcasters.   “CNN’s democratizing of the news fertilized the field for the next innovation: Point-of-view-based news,” Chatham points out.

Chatham cites “CNN’S vacillation” between hard news and “opinionated news,” for lack of a better term.

Chatham continues: “How had CNN lost its way? On one hand, the network was a serious news outlet that honored facts, did smart analysis, and covered big world events. On the other, in order to fend off competitors like Fox News and MSNBC, CNN had begun to experiment with a different kind of business characterized by bigger personalities, sensational news stories, opinion, and a little bit of theater.”

Chatham advances the view that the real problem was that these two identities expressed starkly incompatible purposes, each targeting different audiences with different products, and are derived through opposing values, processes, and cultures.

CNN should have laid claim to one position or the other, but CNN at that time, Chatham says, experimented with both, drifting down a path which one CNN staffer dubbed ‘the murky middle’.

In 2013, Jeff Zucker was named new CNN president of CNN Worldwide, and Zucker promised to bring some clarity to its purpose and—with it—its identity.

The book author shared many more cases of dealing with muddled up purposes, culled from his experience as a strategy consultant. The Apple and CNN cases continue to crop up in the discussion throughout the book, showing that the parallels are uncanny in even divergent industries.

In going back to its core purpose, or in arriving at a more clear-minded one, Chatham recommends mustering enough courage among managers to speak out, capture “occasions of heroism,” to define the “struggles that make a business great.”

Referring to the frightening prospect of telling the emperor that he has no clothes, Chatham leaves this imperative for our readers: “Move toward anxiety rather than away from it … Follow that announcement in train stations and airports (in the United States): “If you see something, say something.”