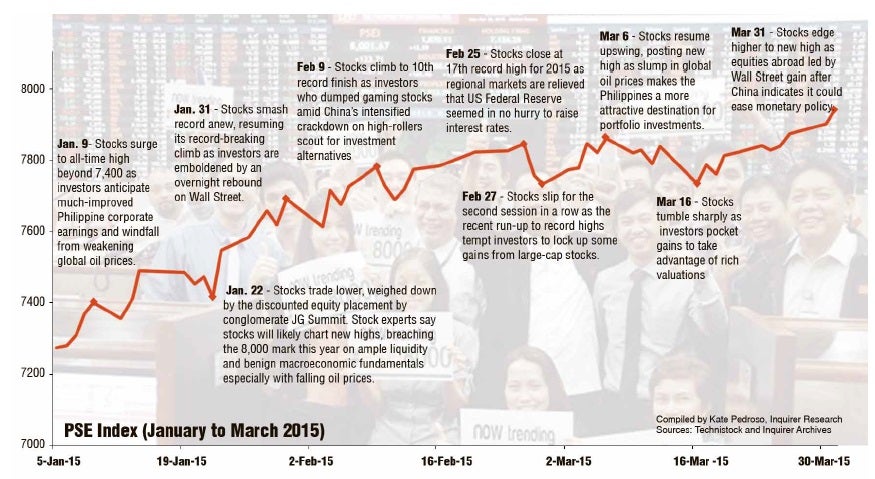 The bulls have ruled the local stock market in the last six years and the consensus points to the local stock barometer continuing to explore uncharted territory this year. In the first three months of the year, the Philippine Stock Exchange index (PSEi) has posted 23 record closing levels and 17 intra-day record highs and gained 9.8 percent.

Apart from the country’s much-improved macroeconomic fundamentals notwithstanding jitters over the forthcoming change in political leadership in 2016, one commonly cited catalyst for the country this year is the slump in global oil prices.

Elsewhere in the world, the decline in oil prices is a cause for concern but not for the Philippines, a net oil importer that is seen to benefit from cheap oil. Consumers will have more spending power, which, in turn, is seen to boost corporate earnings this year compared to a lackluster 2014 performance. Lower cost of raw materials is also expected to shore up corporate earnings. As such, investors are willing to pay a hefty premium to hold on to local stocks.

In the first quarter, the PSEi also tested the 8,000 milestone in intra-day trade before closing the period at 7,940.49.

The market is now trading at more than 20 times projected earnings for the year versus the historical valuation of only 14 to 15 times earnings.

“We think it is best to stay invested since our target for the PSEi remains unchanged,” said First Metro Investment Corp. (FMIC) and University of Asia and the Pacific (UA&P) in the March issue of their joint publication “The Market Call.”

FMIC and UA&P expects the local stock barometer to breach 8,300 to 8,500 levels this year.

“Investor sentiment will likely be positive given the supportive macro factors. We see pullbacks as opportunities to increase exposure,” FMIC and UA&P said, noting that foreign fund flows would likely continue to drive market returns.

Manny Cruz, chief strategist at Asiasec Equities, said the market remained buoyant on the back of continued inflows from foreign funds. He said the target would be for the PSEi to reach 8,500 the year.

“One primary factor is the continued slump in oil prices,” Cruz said, noting that the decline in oil prices was positively affecting the economy.

Total market capitalization of listed companies amounted to P14.98 trillion as of the end of March, up by 17.6 percent year-on-year.

By counter, four of the six sectors were up year-to-date, led by the property and holding firm sub-indices which rose by 13.6 percent and 12.3 percent, respectively. The financial sector gained by 9.9 percent while the industrial sector advanced by 7.1 percent.

However, the services and mining and oil sectors were down by 1.2 percent and 2.1 percent, respectively.

“We’re still bullish on the market but we’re waiting for retracement,” Cruz said, adding that a pullback toward 7,600 to 7,700 would be healthy as this would allow the market to build a stronger base at those levels.

At the same time, Cruz said the market would likely be selective on its way up.

Compared to historical peaks, local stockbrokerage AB Capital Securities noted that the local stock barometer was pointing to a slight “overvaluation.” At its current price to earnings (P/E) ratio of 21.5x 2015 earnings, the PSEi is seen trading at a 38-percent premium compared to regional peers. A P/E ratio of 21.5 times means investors are willing to pay 21.5 times the amount of money they expect to make.

In terms of PEG (price to earnings ratio divided by annual growth in earnings per share), however, AB Capital Securities noted that the PSEi continued to trade at 16-22 percent discount relative to regional peers.

Asiasec’s Cruz said the market was already pricing in the US Federal Reserve’s future monetary tightening. The consensus is that the US Fed—after tapering its liquidity-inducing monetary stimulus—will not raise interest rates until the second half of 2015.

Outside of the US, other major central banks, particularly the monetary authorities of the European Union and Japan, are on an easing mode. This partly offsets the withdrawal of monetary stimulus by the US Fed.

AB Capital Securities said the current strength of the US dollar might delay the decision of the Fed to increase interest rates. But when it does, AB Capital expects the impact on asset classes to be deeper and wider than the US central bank’s tapering of monetary stimulus.

“Markets will most likely react once [US Federal Reserve chair Janet] Yellen removes the word ‘patient’ in her statements,” AB Capital said, noting this would be a signal that the US Fed could start raising rates in the next two succeeding meetings.

“The focus will be from ‘if’ to ‘when’ and ‘how high’ the Fed is planning to hike rates,” the brokerage said.

As such, the local stockbrokerage said the announcement of the US Fed rate increase timing would be a “catalyst for a major correction.” At the same time, it said oil prices would likely recover in the second half of 2015.

Local stockbrokerage Regina Capital Development Corp. noted that the index has successfully held its ground above its 50-day moving average even after sharp corrections that almost threatened to break this level. This led to a breakout, which changed the firm’s trend bias from sideways to sideways to up. As long as the breakout point at 7,862 holds, Regina Capital expects more advances for the index.

“However, beware of potential pullbacks as the index is also entering the overbought territory, which may put selling pressure on prices. Also, it should be noted that the recent breakout was not accompanied by strong volume so traders should exercise caution as the reversal may not be sustained,” the brokerage said.

Another key risk seen this year would be the prospective political noise ahead of the 2016 elections.

“Investors are increasingly looking [at] what will the political transition next year bring,” HSBC economist Frederic Neumann said.

Neumann said that in the Philippines, the political cycle tended to be “more pronounced” in affecting economic cycles than those in other countries. As such, while most people recognize the “enormous” strides taken by the country in recent years, he suggested that the political transition could spell the difference in terms of sustaining the country’s growth outlook.

If the political transition would be positive next year, he said the sentiment could rebound very quickly.

According to the HSBC economist, President Aquino has been a “great consolidator” for the Philippines in the last five years but beyond 2016, Neumann said investors would look for a successor who is an “action hero”—one who can build on recent success with very bold reforms.

Since Mr. Aquino assumed office in 2010, he was able to rein in waste in the bureaucracy, established due process for public tenders and improved governance, the economist said. But the areas where there was “less” progress included the rollout of big infrastructure programs and opening certain sectors of the economy—like mining—to foreign investments, Neumann said.

At the beginning of the Aquino administration, Neumann said he was very bullish, then became “disillusioned” halfway during the term with the delays in big-ticket infrastructure projects. Now at the twilight of the term, the economist said he was “optimistic again.”

“I now realize that caution was warranted,” noting that the Philippines needed a longer period of consolidation.

For the next President, he said investors would look for “someone who gets pragmatic in getting things done” while maintaining the good governance platform initiated by Mr. Aquino. He said this would be one who builds on recent successes with bold reforms in other areas, whether it’s an ambitious infrastructure project that will ramp up in the next two years or opening up sectors to unleash a new economic driver, Neumann said.

Overall, the Philippines is still seen to be in a rare position to outperform despite a weak global backdrop this 2015. But Neumann said the country must tweak its growth strategy a bit from being consumption-dependent to a more investment-led growth, which in turn would need much more investment in infrastructure and manufacturing. To attract manufacturing investments, he added that this would also require additional infrastructure.