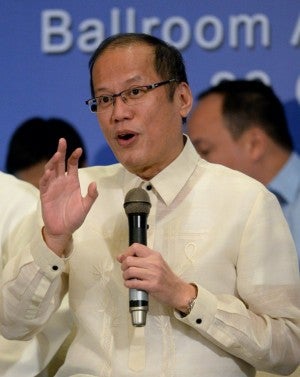 MANILA, Philippines – Recalling his mother’s efforts to give more opportunity to women, President Benigno Aquino III on Wednesday lauded the collective work of various sectors in tapping the potential of Filipina entrepreneurs.

(Because of the collective work of the private sector, government agencies, small businesses, nongovernment organizations and local government units: our women entrepreneurs are no longer just the light of their homes or a partner of men in their work. They now serve as the light of progress and hope in their communities.)

The President’s speech received rousing applause from the 5,000 or so graduates of the joint program of Technical Education and Skills Development Authority (Tesda) and Coca-Cola Philippines. The Sari-Sari Store Training and Access to Resources (STAR) program, which now has 34,000 beneficiaries in the Philippines, provides small store owners with access to resources and skills training.

Aquino said the program not only gives opportunity to thousands of women microentrepreneurs but also helps transform the local economy.

He said that despite its small size, the contribution of each sari-sari store is appreciated.

(With these sari-sari stores, we see the vigor of trade; it is also here where we first see the connections that help bridge the expansion of business.)

Coca-Cola aims to reach 200,000 Star beneficiaries by 2020. Aquino joked that he wouldn’t mind if they increased the target.

Aquino pointed out that of that number, 3.63 million are women. ID

‘Chauvinism has been broken’ in business—women’s group