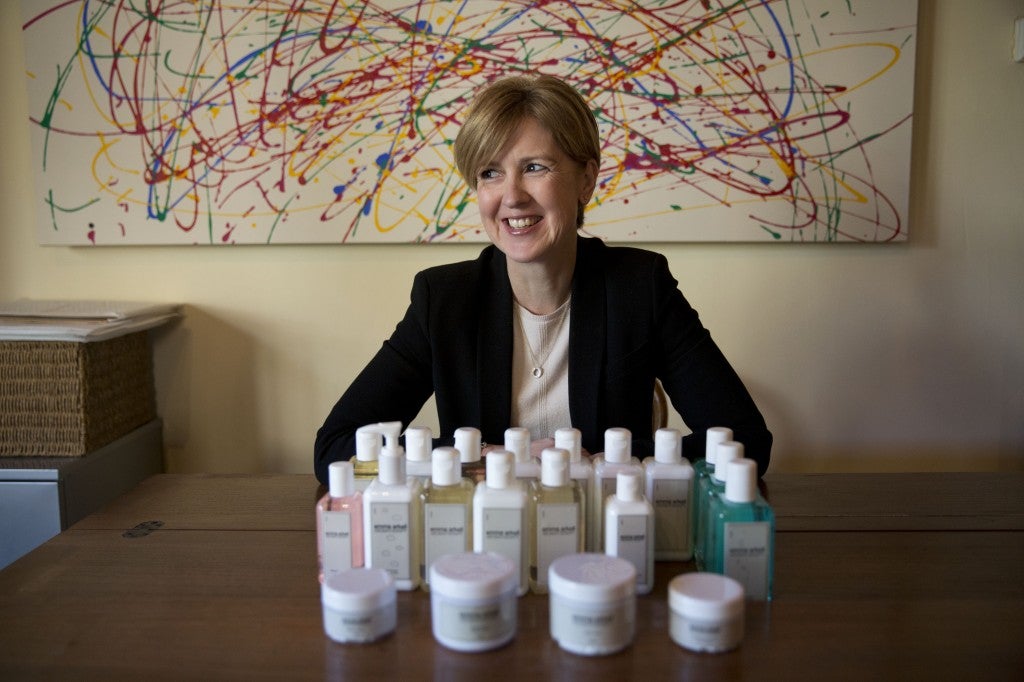 In this photo taken Friday, Jan. 30, 2015, aromatherapist Emma Arkell poses for a portrait with one of the natural remedies for the skin and body she makes near Winchester, England. Evidence is growing that gender equity is not just politically correct window-dressing, but good business. AP

LONDON, United Kingdom — When Rohini Anand took over diversity programs at multinational catering company Sodexo in 2002, she had one goal: To prove that it pays for a company to have equal numbers of male and female managers.

Sodexo, which has 419,000 employees in 80 countries, says she’s done just that. A company-wide study last year found that units with equal numbers of men and women in management roles delivered more profits more consistently than those dominated by men.

“It has become embedded now. It’s not just me talking about it anymore,” Anand says with “I told you so” satisfaction.

Evidence is growing that gender equity is not just politically correct window-dressing, but good business. Companies are trying to increase the number of women in executive positions, yet many are struggling to do so because of a failure to adapt workplace conditions in a way that ensures qualified women do not drop off the corporate ladder, surveys show.

The case for companies to act is compelling.

In a survey last year of 366 companies, consultancy McKinsey & Co. found that those whose leadership roles were most balanced between men and women were more likely to report financial returns above their national industry median.

Companies with more balanced leadership do a better job recruiting and retaining talented workers, reducing the costs associated with replacing top executives, McKinsey found. They also have stronger customer relations because management better reflects the diversity of society, and they tend to make better business decisions because a wider array of viewpoints is considered.

Apple CEO Tim Cook, who came out as gay last year, told PBS it was important to hire people who “complement you, because you want to build a puzzle.”

“You don’t want to stack Chiclets up and have everyone be the same,” he said.

While most big companies now have programs to increase gender diversity, many executives express frustration these programs aren’t working. McKinsey found that 63 percent of the employers it surveyed had at least 20 initiatives to address gender equity, but women held less than a quarter of the top jobs in 92 percent of the companies.

Tapering up the ladder

Sandrine Devillard, who has been studying the issue for the consultancy for about 16 years, said companies were nonchalant about retaining top female talent when she started. Now they want to know what programs work. Fast.

That’s because a woman’s prospects for promotion fall off at every step of the career ladder, according to a separate survey of 130 large companies conducted by McKinsey in 2012. While women made up 37 percent of the total workforce, they comprised 22 percent of middle managers, 14 percent of senior managers and vice presidents, 9 percent of executive committee members and 2 percent of CEOs.

In France, Norway, Spain and most recently Germany, governments have sought to mandate progress by imposing quotas for women on boards.

Norway had the highest percentage of women on boards — 35 percent — among 20 countries in Western Europe, North America and the Asia-Pacific region last year, according to data compiled by Catalyst, which researches gender equity. The U.S. and Australia were tied for 10th at 19 percent.

Board quotas alone won’t close the gender gap because they only address the final step in the career ladder, researchers say. The real challenge for employers is to hire, train and promote talented women so they have a pipeline of qualified female candidates when they need to fill senior roles.

The average workplace remains locked in a post-war factory mentality with structured hours and a requirement to be at the office — and the expectation to keep working from home even when not physically present, researchers say. The use of the Internet has helped working remotely, but for top managerial jobs that might lead to the boardroom, physical presence in the office and attending work-related social events remain crucial. Add in broader social factors, such as expectations that moms do domestic duty, and the pressures can become too much.

Take Emma Arkell. As a top divorce attorney at a large London law firm, she counted celebrities and the British aristocrats among her clients. Her career seemed certain to soar — until the kids came along.

After watching female colleagues struggle to balance family responsibilities with demands at work, Arkell realized she couldn’t do both. Instead, she started her own company making a line of natural skincare products after developing a cream that successfully treated her daughter’s rashes.

“I could do it from home,” she said of the business. “I had complete control of it.”

It’s not just about hours. Women often struggle with a male-dominated culture at executive levels, surveys show. Some have accused such a culture for the aggressive risk-taking that led to the global financial crisis. IMF chief Christine Lagarde quipped that if collapsed investment bank Lehman Brothers had been Lehman Sisters, the crisis would look different.

A recent study at Harvard Business School urged a re-think on why more women aren’t getting and keeping top jobs.

The study, released in December, surveyed more than 25,000 graduates of the school since 1963, when women were first admitted to the MBA program. Harvard researchers Robin Ely and Colleen Ammerman, together with Pamela Stone of City University of New York, found that while men and women start out with similar career goals, women progress more slowly because of institutional hurdles and the demands of spouses for them to manage family responsibilities.

The report suggests employers need to move beyond the idea that “family-friendly” policies such as flexible working hours are enough. This means re-examining “unspoken but powerful perceptions” such as the assumption that women are riskier hires because they are more likely to give up their careers for parenthood. Women also have a role to play in ensuring that their spouses are “real partners” in sharing household and child-care responsibilities, the authors say.

Such factors can be hard to influence at a policy level, however, as they reflect social views.

While governments have focused on the boardroom, companies like Sodexo decided they had to start by building a pipeline to get them there.

Anand, the company’s global chief diversity officer, said Sodexo’s goal is for women to make up 25 percent of its top 300 managers this year. Women already make up 42 percent of the board of directors and 38 percent of the executive board.

“The current workplaces were made by and for baby boomers,” Anand said. “If we are to retain the best and brightest, we need to look at workplaces differently.”