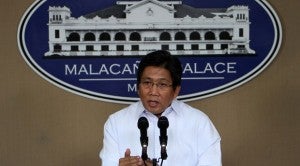 MANILA, Philippines–The Philippines is poised to post its first trade surplus in 20 years as the country enjoys a windfall from the sharp drop in prices of its biggest import commodity—crude oil and refined petroleum.

In a statement, Presidential Communications Secretary Herminio Coloma Jr. said the Philippines was among the biggest beneficiaries of the drop in oil prices, which has fallen by more than half from its average price of $110 per barrel in the last five years to below $48 per barrel recently.

Oil prices have been declining due to rising oil production in the United States and low demand from countries in Europe, Japan and China.

“In the realm of global trading, we expect the continued improvement in our trade balance. There are strong indications the country will have a trade surplus for the first time in two decades. This is due to the strong growth of our exports and low bill on our oil imports,” he said.

Coloma said that cheap oil would also pump up economic growth. “The Department of Trade and Industry estimates that our economic growth would exceed eight percent this year if the price of crude would remain below $60 per barrel,” he said.

Coloma said President Aquino was determined to keep the economy on a steady growth track in his last 16 months in office by continuing to attract foreign investments.

The World Bank expects the Philippine economy to grow by 6.5 percent in 2015 and 2016—the highest among Southeast Asian countries, despite the weak global economy.

Coloma said the country’s rise as a destination for foreign businessmen was evident in the surge in foreign direct investments (FDI) which hit an all-time high of $6.2 billion in 2014, or 65.9 percent higher than the $3.7 billion net inflows in 2013. But the latest figure still pales in comparison to FDIs in other countries in the region.–Gil Cabacungan