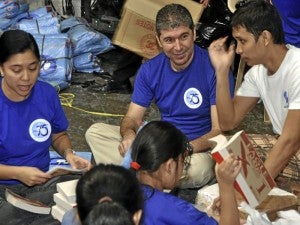 Tetik volunteers with other P&G employees pack school supplies for the company’s Handog Edukasyon program. The Tariff Commission, which helps determine the price of imported products sided with a money-losing local paper producer in an effort help keep the business afloat.

MANILA, Philippines–Julie Levantino mans a dry goods stall in Quezon City’s Dapitan Market selling, among others, school supplies. Paper products are one of their most saleable items, she said. It is a low-margin, high-volume business, with both parents patronizing and schoolchildren her small store all year round.

Her two most marketable products are the 80-leaf half page-size pad of ruled writing paper costing P10 and the ruled notebook with the same number of leaves—bound together by staple wire—worth P15 each. “Mabenta siya (It is saleable),” she told the Inquirer. “Minsan may nagrereklamo na parents na namamahalan sila lalo na kung mabilis maubos ng anak nila ‘yong papel. Pero madalas okay lang dahil steady lang naman ang presyo (Sometimes, parents complain about the price especially when their children use it up quickly. But most of the time it’s okay because the prices are steady).

That situation will soon change after a government agency that helps determine the price of imported products sided with a money-losing local paper producer in an effort help keep the business afloat.

Last week, the Tariff Commission has recommended the imposition of a definitive safeguard measure of P2,470 a metric ton on imported newsprint, which it said was found to be causing serious injury to the domestic newsprint industry.

According to the Tariff Commission, this recommendation stemmed from its findings, which showed that the “domestic newsprint industry suffered serious injury from 2012 to September 2014, as shown in significant impairment in its overall profitability, market position, production, domestic sales, employment and labor productivity.”

This domestic industry for newsprint, the raw material used in the manufacture of textbooks, notebooks, writing paper and newspapers, is dominated by Trust International Paper Corp. (Tipco) —a locally owned firm that has been losing money for several years now, ostensibly due to competition from imports.

The result, they warned, would be sharp increases in the prices of essential school items like books, notebooks and writing paper that millions of Filipino students use, just because the Tariff Commission caved in to the demand of a single private entity that is having difficulty competing in an open market.

In its petition, Tipco pointed out that it was the only player in the newsprint manufacturing industry in the country. But because of the importation of cheaper newsprint from overseas, the domestic industry “is continuing to suffer grave injury and substantial losses,” Tipco executive vice president Leon Dy said in his letter to Trade Secretary Gregory Domingo. “This request aims to protect the domestic newsprint industry from undue injury and unfair competition caused by increased imports brought in at unusually low prices.”

The firm claimed that the steady increase in the amount of paper imported into the country had caused it to steadily lose market share from 2007 to 2014.

In documents gathered by the Inquirer from the DTI’s investigation, Tipco claimed there was a “threat of further serious injury” to the domestic paper industry if the government failed to move against the rising volume of cheaper imported “newsprint.”

Both arguments have been belied, however, by several industry stakeholders who pointed out that Tipco had been incurring significant business losses since 2002, long before it filed its application for protection under the Safeguard Measure Act or Republic Act 8800—a law that allows local fledgling players to seek protection against imports through higher tariffs if the government deems market imbalances unfair to the domestic industry.

But is the prevailing market condition, in fact, unfair to Tipco? The Inquirer learned that years before it claimed that it was being adversely affected by imported newsprint, financial losses were already at staggering levels. In 2002, Tipco reported a loss of P607.5 million, then P777.2 million in 2003, P532.8 million in 2004 and P532.8 million in 2005.

At the same time, the domestic paper manufacturing sector can hardly be considered an infant or sunrise industry (which should be the main beneficiary of the Safeguard Measure Act) since it has been in operation for many decades, with little to show by way of improved efficiency or higher competitiveness against late-starting foreign paper manufacturers.

These losses prompted Tipco to seek a court-assisted corporate rehabilitation in 2005. Despite the respite given to it by the judicial court in 2006, the firm failed to rehabilitate itself and continued to incur business losses running to the hundreds of millions of pesos from 2006 to 2014—despite the fact that the importation of newsprint surged only in 2009.

In a position paper filed with the Tariff Commission by the users of imported newsprint—which includes the Inquirer Group of Companies and other publishing companies—it was pointed out that Tipco admitted during the public hearings that it anchored its corporate rehabilitation on generating 70 percent of its sales from exports of newsprint to other countries, given the limited upside of the domestic market.

“This business decision failed and Tipco’s export sales generated more business losses from 2007 to 2011, forcing it to close down its exportation of newsprint in 2011 and to stop the operation of its export-oriented paper machine in October 2011,” the position paper said.

“All these business losses were incurred not because of the surge or increase in the importation of newsprint in the Philippines, but were self-inflicted business decisions,” the industry players pointed out. “In fact, it was established during the public hearings that Tipco suffered a staggering loss of P413.2 million when it invested money in a real estate company, specifically in Tipco Estates Corp.”

In this case, Tipco’s losses were due not from the competition brought by imported newsprint but from a bad investment.

Speaking to the Inquirer in an earlier interview, Association of Paper Traders of the Philippines Inc. president Sammy Rosario asked: “Why should the government penalize millions of schoolchildren just to benefit one local manufacturer?”