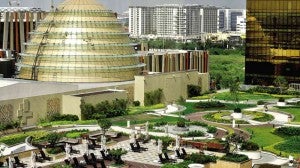 CITY OF DREAMS Dubbed City of Dreams, this is the country’s newest, $1-billion integrated resort and casino, which opened Monday, Feb. 2, 2015, at Pagcor Entertainment City. The facility, a partnership with the SM group, lies on Aseana Avenue corner Roxas Boulevard in Parañaque City. RICHARD A. REYES

MANILA, Philippines–The local casino industry is expected to post significant growth this year in terms of revenues despite a widening anticorruption crackdown by the Chinese government that has seen gaming revenues across the region drop sharply.

More importantly, new Philippine casino resorts would likely sidestep the worst effects of the decline in the number of mainland Chinese clients because, from the outset, their business models had not relied too much on the promise of revenues from this big-spending group, according to the head of the Philippine Amusement and Gaming Corp. (Pagcor).

“China is not our number one market,” Pagcor chair Cristino Naguiat said in an interview with the Inquirer, explaining that the Philippine gaming industry thrived on a combination of foreign and local players, with the Chinese being only a small fraction of that revenue mix.

“Of course, more Chinese coming here would be better for us, but of 100 million outbound Chinese tourists, we get less than 1 percent of that. It’s relatively small,” he said. “There’s a wider mix of nationalities coming here to play in our casinos. It’s not just the Chinese.”

For this year, the Pagcor chief said that “another double-digit growth is very possible” for the industry’s gross gaming revenues, aided significantly by the opening earlier this month of the $1-billion City of Dreams casino resort development in the Entertainment City complex.

In 2014, the local casino industry experienced a 16-percent increase in gross gaming revenues compared to the previous year, the Pagcor chief said, adding that the consolidated revenues of the Philippine gaming scene now stood at $2.5 billion.

“But more important than that is the fact that our VIP and junket players have increased by almost 50 percent,” Naguiat said, referring to big-spending foreign players who fly in just to experience the new local casinos.

The Pagcor chief pointed out that gaming revenues for Macau and Singapore have declined in 2014 by double-digit rates, while that of the Philippines increased by double digits.

“At $2.5 billion for 2014, we’re still lower than Singapore’s. But ours is increasing while the rest are declining,” Naguiat said. “We’re coming from a low base figure.”

At the same time, Naguiat pointed out that delays in the construction of the gaming complexes of Japanese gaming tycoon Kazoo Okada and Genting’s Resorts World Manila, slated for completion in 2016 and 2017, respectively, were fortuitous events that would help the local industry avoid having an overcapacity during the ongoing China crackdown.

What’s inside City of Dreams Manila?