No glitter in this gold investment ploy | Inquirer Business

No glitter in this gold investment ploy 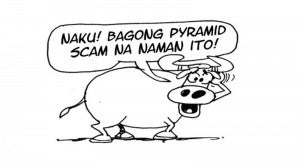 MANILA, Philippines–If it offers hefty investment “rewards” that are too good to be true, beware.

The Securities and Exchange Commission (SEC) has warned the public against putting hard-earned money into suspicious investment schemes that use social media and promise huge returns in a short period of time.

In an advisory issued on Friday, the SEC warned about an entity calling itself Emgoldex Philippines, which claims to have links with international gold-trading firms in Germany and the United Arab Emirates.

The corporate watchdog said Emgoldex was not authorized to solicit investments in the country and had not secured prior registration and license or permit to do so as required under the Securities Regulation Code.

The SEC received reports that Emgoldex was using popular social networking Facebook to lure investors into subscribing to its “Pinoy Style Patak Patak” with a promise of high returns.

Several promotional videos posted on YouTube and being circulated through various social networking sites claim that the hefty profits may be earned in at least seven days if the investor were to recruit two more people into the scheme.

Photos of deposit slips indicating payouts were posted on Emgoldex’s Facebook page, apparently to show prospective investors that real profits were being made by real people.

“Per verification, Emgoldex Philippines is not a registered corporation or partnership,” the SEC said.

“The public is hereby advised to exercise self-restraint from [putting] money into such high-yield-high-risk investment scheme and to take the necessary precautions in dealing with the above-named entity,” the corporate regulator said.

Asked about this matter, SEC Chair Teresita Herbosa said in a text message that her office had started looking at Emgoldex after it was brought to its attention by a third party. She said it had also received a complaint via e-mail.

People with information regarding the operations of Emgoldex were advised to report to the SEC’s enforcement and investor protection department, Tel No. 5847187 or 5847652.

In its promotional videos, Emgoldex names a parent company, Gold & Silver Physical Metals, based in Munich, Germany. The mother firm was touted to be engaged in selling gold in quantities ranging from 1 to 100 grams on the Internet. It compared itself to reputable online platforms, like eBay, Lazada and Amazon.

The company pitches gold as a strong asset class, citing its strong return on investment and how this precious metal is a good hedge against inflation. In one of its many videos targeting Filipino audience, it claims to have about 500,000 investors globally.

The videos talk more about how a prospective client makes money through a multilevel marketing scheme but do not discuss how the company can earn and guarantee the promised hefty returns.

Unlike most reputable investment firms, Emgoldex does not indicate any local office address on its website (www.emgoldex.com.ph) and cites only mobile phone numbers. It does not disclose its board of directors or key people behind it.

Companies with similar operations and using the same brand name have been the subject of complaints in other markets overseas, including in the United States.

Based on a report from the Boston Globe dated Oct. 22, 2014, for instance, civil fraud charges were filed by Massachusetts Secretary of State William Galvin against EmGoldex Team USA Inc. and its four principals on allegations that this group was operating a “pyramid” scheme.

The group has reportedly lured investors into buying and selling gold bars through its online store.

Pyramiding proponents make a lot of money by recruiting people into the scheme. The first ones to join typically earn a lot, thus prodding more people to join by spreading this “get-rich-quick” deal by word of mouth.

The scheme lasts only for as long as new people are recruited. Once the “pyramid” collapses, the latest recruits suffer the most.

Asked whether the SEC was investigating other companies in the Philippines involved in pyramiding schemes, Herbosa said: “Pyramiding scheme [is] basically the same, different only in name, with kind of underlying asset/product and rate of promised return invariably on high side.”

“We have new infomercials, nationwide financial education program,” the SEC chair said, adding that the corporate regulator would formally coordinate with the Department of the Interior and Local Government (DILG) soon.

One website (www.emgoldex.com) that claims to be the real Emgoldex company selling bars of investment gold has also warned against using the brand name for “fraudulent actions.”

The firm, which says it operates out of Seychelles and Amsterdam, issued a disclaimer on online marketing schemes using its brand name.

In a post on July 14, 2014, Emgoldex warned against copycats using the Internet to seek investors with the “promise of fast enrichment, the investment of your own funds and rapid increase of your return.”

“They also consist of receipting of potential customers funds in exchange for promises to create websites, similar to the style and design of the official website of the online store, but with the contradictory information.

“Moreover, they represent themselves or their legal entities as the employees of the company and online store, and many other unacceptable activities,” the Emgoldex website said.