An old world feel to a newly minted establishment

One takes the place for granted, passing by aboard a jeepney in a busy district in Pasay City near the City Hall, while en route to the Cultural Center of the Philippines or to Solidaridad Bookstore in Padre Faura, Manila.

What do you see? A black gate with a guard, and what seems to be a row of old fashioned apartments given a new coat of dark paint.

The style seems to hark back to the 1950s, you say to yourself. And you’re a child of the ’50s yourself. 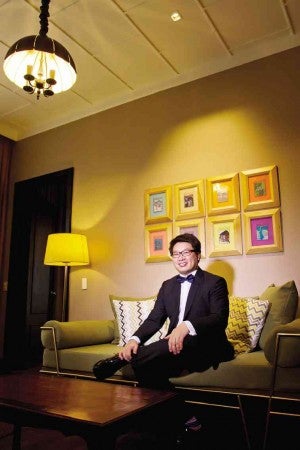 Suddenly, there’s an invitation to visit that very place for a media tour. It turns out to be an upscale hotel, The Henry Manila (there’s a The Henry Cebu which opened last year).

The dark gray apartments lead to a big, imposing white house, with more apartments in the background, this time painted white.

The tree-lined ambience takes you back to the postwar era, specifically 1948, the year the houses owned by a Chinese family were constructed.

The property was later leased to a Frenchman who had a museum orientation and, just recently, to Innovoterra Properties, which is chaired by entrepreneur Henry “Hanky” Lee, who has a certificate in management from Harvard University.

Lee hastens to add that the hotel was not named after him, but that the word “henry” signifies for him worldwide sophisticated travelers.

“This is a personal opinion,” he says.

The houses and rooms have been gloriously restored, filled with prints, paintings and sculptures, TVs, refurbished bathrooms and other amenities.

A family can rent a whole house. How much would that cost?

“The market is A-B, for sophisticated travelers,” says the innkeeper, without meaning to sound snobbish. The implication is, backpackers are not welcome unless, of course, they have the moolah (or they can go to Boracay).

The guests are a mix, but mostly foreigners, the ratio being 80 percent to 20 percent for domestic visitors. There are Italians, French, Germans and Americans.

The investment is “a big amount,” says Lee. “The hotel business is a long-term investment. It is actually not easy. I hope for an ROI (return of investment) in 10 years.”