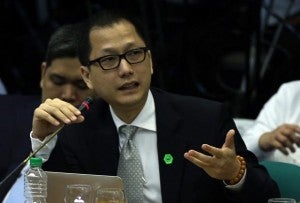 According to the criminal complaint filed by the BIR in the Department of Justice, Tiu did not pay correct taxes in 2008, as well as failed to file his income tax return in 2013.

In 2008, Tiu declared an income of only P824,244.25, whereas Securities and Exchange Commission (SEC) documents showed that the businessman’s investments in AgriNurture Inc., which is listed on the Philippine Stock Exchange (PSE), as well as Tiu Peck and Sons Holding Inc. amounted to P53.5 million, the BIR said in a statement.

Tiu is chair of AgriNurture and another PSE-listed firm, Greenergy Holdings Inc.

In a text message, Revenue Commissioner Kim Henares said the BIR investigation of Tiu’s tax deficiencies was somewhat a spin-off of the inquiry made by the Senate into the business of Tiu, whose name was dragged into the investigation of Binay’s alleged ill-gotten wealth.

“The Senate called our attention that there is an Antonio Tiu who said he is very rich. Since we have never heard of him, due diligence dictates that we should find out if he is really who he said he is and whether he had been paying his taxes,” Henares said.

She said rich people were not necessarily high on the agency’s checklist of possible tax evaders.

But for Tiu, who was abroad when the BIR filed the tax evasion case against him, the lawsuit was not only “premature” but also a form of “harassment.”

Tiu has denied being a dummy for the Vice President and being a money launderer, as alleged by some senators. The businessman is allegedly Binay’s front in a 350-hectare agricultural property in Rosario town, Batangas province.

“While expected, it is still disappointing that the BIR has allowed itself [to be used] to unduly harass and vex me with the unfounded and premature filing of a criminal complaint for tax evasion,” Tiu said in an e-mailed statement.

“[T]here is still an ongoing audit being conducted by the BIR and which audit I have been cooperating in good faith,” Tiu said.

“As I have repeatedly said, I am open to any independent and fair investigation that adheres to the rule of law. [But] clearly, any sense of fairness and justice has been set aside in filing the premature criminal complaint against me,” he said.

Tiu said his lawyers were “reviewing the appropriate legal actions necessary to protect my rights and interest.”

“Using the expenditure method of investigation, the BIR established that Mr. Tiu substantially underdeclared his income by 6,395 percent in 2008,” the BIR said.

In 2013, Tiu did not file a return, the BIR said. Based on the general information sheets furnished by the SEC to the BIR, Tiu invested in or acquired shares of stock worth P71.42 million in the two companies that year.

“As a consequence of his acts and omissions, Mr. Tiu was sued for an aggregate income tax liability amounting to P73.34 million, inclusive of surcharges and interests,” the BIR said.

Tiu’s actions violated Sections 254 and 255 of the National Internal Revenue Code of 1997, or the Tax Code, according to the BIR.

The tax evasion case slapped against Tiu is the 330th under the Run After Tax Evaders (RATE) program of the BIR, aimed at improving tax collection.

On Oct. 22 last year, Tiu, answering allegations that he was a dummy for Binay, told a Senate subcommittee investigating corruption in Makati during the term of the Vice President as mayor of the city that it was he who owned the Batangas property.

He said the property was 150 hectares, not 350 hectares, and that he bought it from Laureano Gregorio for P446 million under certain conditions.

Tiu, however, could not show proof of ownership, saying that what he paid for was the right to use the land, drawing the ire of the senators, who castigated him for claiming ownership when he had no title to the property whose sale was not yet a done deal.

He said he made a down payment of P11 million on the property and issued postdated checks covering the balance to Gregorio.

Gregorio, however, could not be found for questioning in the Senate. With a report from Inquirer Research

Tiu may face charges if proven to be Binay dummy, says Cayetano

‘DonBelle’ learning from well-established love teams of ‘KathNiel’ and ‘LizQuen’