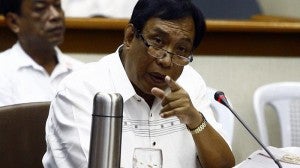 Alphaland Corp. , owned by businessman and former Marcos trade minister Roberto Ongpin, on Thursday turned the tables on former Makati Vice Mayor Ernesto Mercado—the main whistle-blower against Vice President Jejomar Binay in the Senate probe of irregularities in Makati when Binay was its mayor—saying that it was the former vice mayor who asked for kickbacks from Alphaland.

Alphaland dismissed Mercado’s allegation that the property developer paid some P200 million in kickbacks to Binay for a land deal in Makati City with the Boy Scouts of the Philippines (BSP). Binay is a longtime president of the BSP.

“I am sure you will remember that you made less than subtle hints that some ‘benefits’ were due to you for agreeing to conclude this project, and I am sure that you will also remember what I explained to you that Alphaland was a joint-venture company with the Ashmore Group, and that every transaction was closely scrutinized by Ashmore,” Alphaland president Mario Oreta said in a letter to Mercado, a copy of which was provided the Inquirer.

“Thus, it was impossible for Alphaland to agree to give you any such ‘benefits,”’ Oreta added.

The United Kingdom-based fund Ashmore has ended its partnership with Alphaland.

At the time the land deal was consummated, Mercado was also an official of the BSP and headed its asset management committee. He was in charge of either acquiring or disposing of properties of the BSP, which counts among its members some two million schoolchildren nationwide.

The 2008 deal called for the BSP to enter into a joint venture with Alphaland using its one-hectare prime property on Ayala Avenue Extension and Malugay Street in Makati, on which the developer would build a three-tower condominium complex on top of a five-level sports club and mall.

The property was donated by tire maker BF Goodrich to the BSP in an agreement in 1976 under a leaseback arrangement. The lease was assumed by Sime Darby, which eventually acquired BF Goodrich.

The BSP and Sime Darby signed an agreement in 2005 for the sale of the property, appraised at P1 billion, in which the former would get 60 percent and the latter 40 percent.

In 2008, the BSP entered into a joint venture agreement with Silvertown Property Development Corp., the local arm of Sime Darby, that Alphaland later acquired, to develop the property.

In the deal, BSP’s 60-percent stake in the property was valued by a third-party appraiser at P600 million, and this was recorded as the value of its contribution to the Alphaland joint venture—equivalent to 15 percent of the project’s total cost of P4 billion.

Oreta said that “the entire deal” was negotiated and signed for by Mercado in his capacity as the BSP official deputized for that purpose by the group’s board of directors.

Binay had no involvement in the transaction, said the Alphaland official.

Mercado, then BSP senior vice president, said he signed the 2008 agreement on instructions from Binay, who was about to leave at the time for abroad.

The former vice mayor testified on Thursday at the resumption of the Senate blue ribbon subcommittee hearing on irregularities in Makati City when Binay was its mayor that under BSP rules he and/or Binay could signed agreements entered into by the organization.

In his letter, Oreta said Mercado had telephoned him last December and informed him of the former vice mayor’s intention of having the Alphaland deal included in the Senate hearings against Binay.

“I told you that the Alphaland-Boy Scouts deal was entirely aboveboard and any attempt by you to state or infer otherwise would be vigorously opposed by Alphaland,” Oreta said.

“Alphaland categorically, and in the strongest possible terms, denies these baseless and false allegations of Mr. Mercado,” the company said in a statement. “There was no kickback paid to any government official in connection with the Alphaland-Boy Scouts project.”

In his testimony at the Senate yesterday, Mercado said Binay’s kickback from the deal accounted for 5 percent (or one-fourth of the supposed 20 percent of the BSP share in the joint-venture with Alphaland.

The former vice mayor said the repository of Binay’s commission of close to P200 million was Noble Care Management Corp., which Oreta owned.

Thus, he said Binay’s total commission from the deal was P189 million.

According to Oreta, the project—which is now close to completion—now has a market value of P21 billion, meaning that the BSP’s 15-percent stake is now worth P3 billion, representing a 400-percent return on its investment over a seven-year period.

“Alphaland intends to sue Mr. Mercado for criminal libel and defamation (and will claim at least P100 million in damages) in the proper courts,” the company said.

At the Senate hearing, Mercado said Oreta, apart from heading Alphaland and Silvertown, was president and CEO of Constant Builders and Development Corp. to which Binay “allegedly” sold his Tagaytay mansion in 2008.

Oreta was also a top campaign donor to Sen. Nancy Binay in the 2013 midterm elections, the former vice mayor said. With a report from TJ Burgonio

Only Ayalas didn’t give Binay condos–Mercado