Is another global financial crisis coming?

“Tinder” is defined as readily combustible material, like dry twigs, used to kindle fires. You will be surprised at who used the image to describe what the US central bank is sitting on. More on that later; it is best to start with the mess in Europe.

The European countries are heavily in debt after the bailouts in the wake of the Great Recession of 2008-2009. The following are the ratios of their debt to gross domestic product (GDP) as of December 2013. (These are Eurostat data published in Bloomberg.) The larger the debt, the greater is the danger for default. For comparison, the ratio of the Philippines is 49 percent. Topping the list is Greece, whose debt is 175 percent of its GDP. That is, its debt is almost twice the size of its economy. 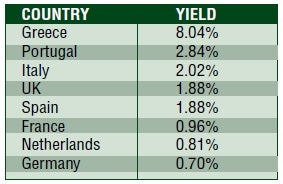 A nation’s debt increases every time it posts a budget deficit. Large and persistent budget deficits signal that the debt will remain swollen. The following are December 2013 European data on budget deficits as a ratio to GDP. For comparison, the latest ratio of the Philippines is a deficit of 1.9 percent of GDP.

The largest deficits show up in Greece, Spain, the United Kingdom, Ireland, Portugal and France. While the deficits shrank compared to the year before, the ratio of Greece actually rose, from 8.6 percent to the current 12.2 percent. Hence, the fiscal situation in Greece has worsened. 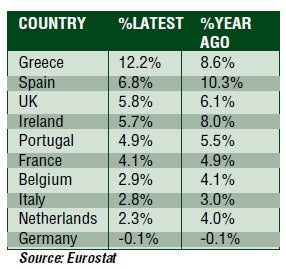 Another indicator of trouble is the annual yield on bonds. Governments sell bonds to investors to raise cash. When investors fear that the government may end up defaulting on the loan, they charge a higher rate of interest. That should compensate them for the risk. Hence, high bond yields point to country risk. At the same time, high interest rates make it harder for a country to borrow. Its debt also becomes more burdensome.

The following table presents interest rates on 10-year Treasury bonds. As Bloomberg notes, yields over 7 percent resulted in bailouts for Greece, Portugal and Ireland. Once again, Greece tops the list with a yield of 8.04 percent.

Fixing the deficit will require raising state revenues and cutting expenditures. This will be most difficult as Greece tops European unemployment, with a rate of 25.9 percent, reaching even 49.3 percent among the youth. High unemployment results in low tax revenue. It also unleashes political strife, which blocks the road to slashing government spending.

The problem is not just limited to Greece. All of Europe is limping along with a projected 0.8 percent growth for the euro zone, very low 0.6 percent inflation, sluggish investment and double digit unemployment.

Indeed, the UK prime minister is warning of another global financial crisis. “Six years on from the financial crash that brought the world to its knees, red warning lights are once again flashing on the dashboard of the global economy,” he said last Nov. 17.

Calm after the shock

If a default in Europe breaks out, the world has the resources to plug the leak—temporarily. The European Central Bank (ECB) commits to a stimulus of $1.25 trillion to buy private debt and to offer long-term loans. The ECB has decided also to maintain its interest rates at a record low of 0.05 percent.

Beyond Europe there are other sources of cash, which can spill over to the continent.

The US Federal Reserve (the Fed or the central bank) has injected $4.5 trillion into the US economy through its quantitative easing or QE program. QE created immense sums of money to buy government and corporate debt, including banks’ sour housing mortgages. The Fed is gradually ending QE, but it will maintain its interest rates at near zero levels. As such, easy money will continue to flow to the United States and beyond.

Then there is the dramatic move of Japan. The Bank of Japan pledges to unleash $700 billion, buying stocks in the country and abroad.

All told, a shock from Europe can be dampened due to the available pools of liquidity.

However, the problem will emerge after calm returns. Investors will wake up to the fragility of the system and will park much of their funds. And that can ignite a bigger conflagration.

Refer to the story, “Wait till you see what Alan Greenspan’s been saying” by Jeff Cox, CNBC website, 31 Oct. 2014.

I believe that the tinder to the fire is the great pile of dollars in the US stock market. The American market seems overvalued and due for a major correction.

As seen in the S&P 500 index, the market has tripled in value since 2009, with only minor corrections in 2010 and 2011. Driving the expansion is QE, which has resulted in record low interest rates. The effective Federal funds rate has been near zero for more than 5 years, compared to above 5 percent before the Great Recession. The Treasury 10-year note is now at 2.5 percent, compared to almost 7.5 percent in 2000.

The very low rates yield bubbles as borrowing becomes cheap. (Recall that the low interest rates of 2002-2007 led to the subprime housing bubble that preceded the Great Recession of 2008-2009.) They also force savers and conservative investors to turn to stocks, as they are discouraged by the low returns on fixed-income instruments.

US stocks now seem to be expensive and overvalued. The data in the graph below are taken from the Federal Reserve bank of St. Louis. It shows the ratio of market capitalization to GDP. Warren Buffet calls it “probably the best single measure of where valuations stand at any given moment.”

The scary scenario is that the economic woes of Europe may ignite, after a period of calm, another great crash.