MANILA, Philippines—The Samahang Industriya ng Agrikultura (Sinag), a leading agricultural group in the country, on Tuesday said the Philippine government lost around P4-billion in revenues in 2013 and almost a million Filipinos dependent on hog raising lost their livelihood in the last four years due to outright and technical smuggling of pork meat.

Sinag said data from the Bureau of Animal Industry (BAI) indicate that 199 million kilos of pork were imported last year. However, a United Nations Commodity Trade Division (UN ComTrade) report of countries that exported pork meat to the Philippines showed pork importation at 237 million kilos –
a difference of 38 million kilos that are presumed smuggled to the country. 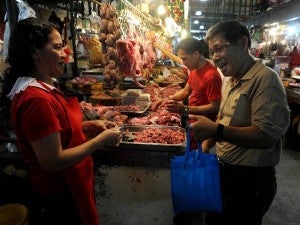 “Multiplying the 38 million kilos unaccounted for with the correct duties for prime cuts misdeclared as pork fats or offal, the result is a staggering P3.85-billion in lost revenues for government,” Sinag chair
Rosendo So said.

The Philippines currently bans pork importations from China due to the outbreak of Foot and Mouth Disease (FMD) in that country. The Philippines is one of few countries that the World Organization for Animal Health (OIE) has certified as FMD-free.

But more than the billions in lost revenues due to smuggling, the Sinag chair said the “unkindest cut” is the loss of livelihood of close to a million Filipinos engaged in backyard hog raising. “From 9.5 million heads in January 2010, the number of hogs raised by backyard raisers dropped to a precarious 7.6 million in 2014. This shows a drastic drop of 1.9 million heads of hogs with an estimated cumulative value of close to P40-billion since 2011,” he said.

“We’re fighting smuggling on two fronts: one is outright smuggling and the other is technical smuggling where illicit importer-traders misdeclare imported prime pork cuts as pork offal to evade paying the right taxes (tariff),” So said.

Pork offal is levied only five percent (5 percent) as against the 40 percent tariff on prime cuts. Offal refers to a butchered animal’s internal organs, entrails, skin and other leftover materials commonly used as extenders in processed meat products like hotdogs and sausages.

So said the mathematics for technical smuggling is simple: for every 20-foot container containing 25,000 kilos of prime pork cuts but misdeclared as offal, illicit importers pay only a 5-percent tariff rate for offal at (US$1/kilo reference price) or around P50,000. If importers declare the real content and pay correct duties for prime cuts, they should pay P1.32 million for each container using the 40-percent tariff rate for choice pork.

“Sinag fully supports the reform efforts of agriculture secretary Proceso Alcala and customs commissioner John Phillip Sevilla. We want them to help us unmask and charge erring officials from BAI, the National Meat Inspection Services and BoC personnel that are in cahoots with
illicit importers and smugglers,” he said.

“Malinaw na may sabwatan ang ilang opisyales ng BAI at BoC (It’s clear there’s a conspiracy among officials of BAI and BoC). During the recent Senate hearing, BAI officials cannot even identify who, and where the processors and importer-traders are bringing the imported pork.

“Unfortunately, some of these frozen imported pork end up in wet markets which not only harm our local industry but put at risk the public health of our consumers since thawed meat being passed off as fresh meat are unsafe to consume,” said So.