MANILA, Philippines—Vista Land & Lifescapes reported a net income of P4.2 billion for the first nine months of the year, 12 percent more than in the same period last year on the back of a double-digit increase in revenues from core housing products.

With the nine-month results, VLL is on track to hit its goal of sustaining double-digit growth in sales, revenues and net profit for the full year, officials said at a press briefing on Wednesday. For the first nine months, VLL’s real estate revenues grew by 13 percent year-on-year to P16.7 billion. 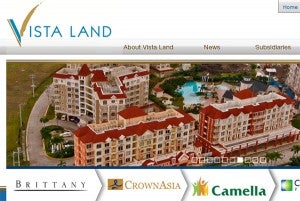 As an indicator of future revenue growth, nine-month sales reservation rose by 9 percent year-on-year to P38.7 billion, of which P12.8 billion was generated in the third quarter alone. About 17,000 housing units were taken up by the market at a price of P2.2 million per unit. For the third quarter alone, sales reservation was up by 7.5 percent year-on-year.

“I am very confident that we will meet our guidance numbers for sales, revenues and earnings this year,” said Manuel Paolo Villar, VLL president and chief executive officer. “I am pleased to report that the strategies in the housing market that we have adopted will allow us to meet our full year targets.”

Villar said the fourth quarter would likely remain robust but momentum could even be stronger in the first half of next year. “We’ve been running down our less prime inventory and looking for increased momentum in the first half (of 2015). We deliberately delayed certain projects in anticipation of commercial developments, such as in Vista City in Daang Hari,” he said.

Gross margin for the nine-month period stood at 50.6 percent versus 51.2 percent year-on-year. Villar said this was in line with the company’s target to maintain a margin of at least 50 percent.

“Most of our sales have been coming from our core product which is housing, both in Metro Manila and in the provincial areas. We fully expect to see continued strong sales performance in the coming years as demand for house and lots, particularly in the mid to low end segment of the market, continues to be robust. We launched 16 subdivisions projects outside Metro Manila such as Cebu, Batangas, Iloilo, Quezon and Isabela to name a few,” the elder Villar added.

He said moving forward, the Villar group as a whole would look at solar energy to complement housing and mall developments. “We’re a logical proponent of that because we’re in housing and in malls and we’re national so we can easily look for a place for it,” he said. Apart from Vista Land which is mostly in residential development, the Villar group is into shopping mall development through Starmalls and has privately held companies looking into utilities and power projects.

“As you all know by now, we are the leader by far in the house and lot segment and have a strong competitive advantage given our track record of delivering quality housing units for more than thirty years across the country,” the elder Villar added.