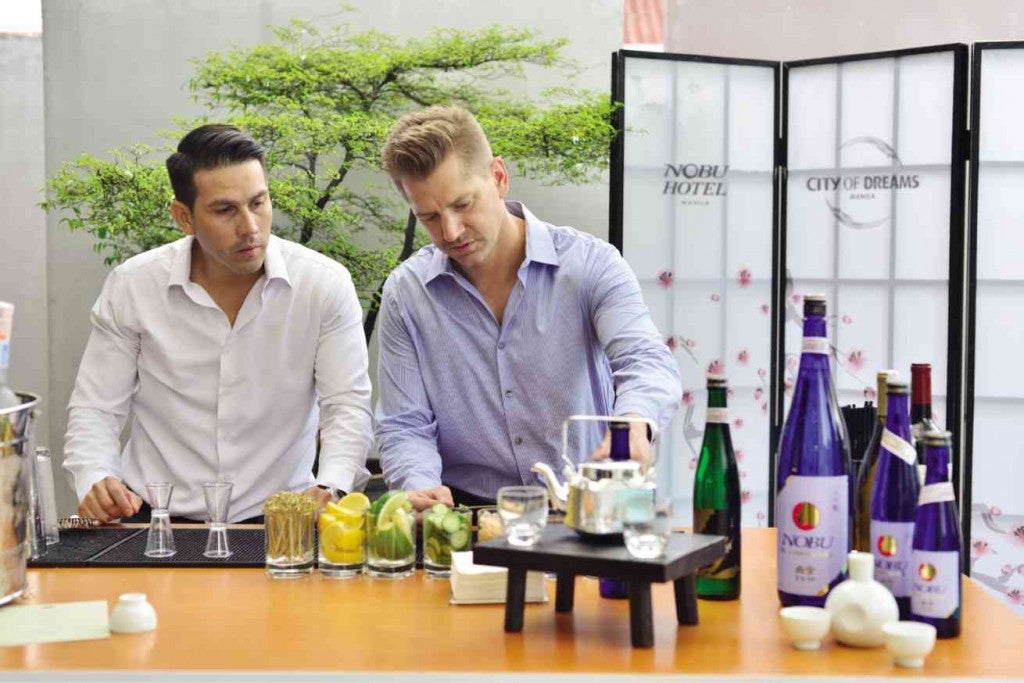 In 1995, New York Times restaurant critic Ruth Reichl gave Nobu three stars and wrote this: Nobuyuki Matsuhisa succeeded in wrenching Japanese food from its classical base by incorporating new ingredients into old dishes or retooling tradition. His “new style sashimi” is a case in point: slightly cooked, it incorporates olive oil, garlic and other ingredients that no traditional Japanese chef would dream of using. The result is something that seems like a Japanese dish but is not. By using chilies, caviar and cilantro in his dishes, Mr. Matsuhisa created an entirely new take on Japanese cuisine.

Ten years later, when Nobu 57 opened, New York Times restaurant critic Frank Bruni gave it three stars and wrote this: Nobu 57 gets exactly right what many of Nobu’s less direct descendants don’t: the dependable fineness and freshness of product; the calibration of sweetness, tartness, richness and       modulated fire in many dishes; the efficient service.

After conquering New York, Nobu opened branches across America and around the globe, sweeping Michelin stars everywhere: Nobu Berkeley, Las Vegas, San Diego and London have one Michelin star each. Today, there are 32 Nobu restaurants in 28 cities around the world. The good news: Nobu Manila will be joining this roster of restaurants early next year, with its soft opening happening before the year ends.

In anticipation of the launch, a preview dinner was held Thursday night, with no less than Chef Thomas Buckley, corporate executive chef of the Nobu Group, in the kitchen. The menu was excellent. If this is what we can expect when Nobu Manila finally opens, be prepared to be blown away.

Signature dishes will be served so we can get a taste of Nobu just as it is in Michelin-starred Vegas or the original outlet in New York. One of these dishes is the Yellowtail Jalapeño, a great introduction to what the hype is all about: the ever so thin slices of fish are characteristically Japanese— light and refreshing—but the addition of jalapeño gives the plate a South American twist. This dish encapsulates the essence of Nobu, who made fusion trendy way before fusion became a global culinary trend (and made into confusion by lesser chefs). 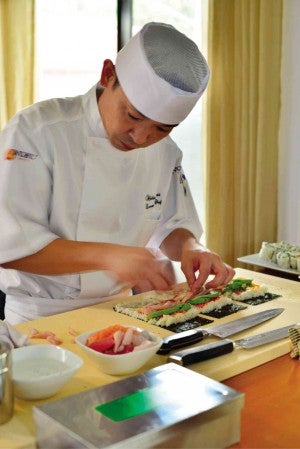 Nobu Matsuhisa became famous for blending traditional Japanese dishes with South American ingredients. It all started when he opened his first restaurant in Peru in 1973 and, unable to find ingredients he needed for his Japanese menu, he improvised using Peruvian ingredients instead.

He brought this concept to the United States in 1987 when he opened Matsuhisa in Beverly Hills, which quickly became a hot spot frequented by Hollywood celebrities. One of these celebrities was Robert de Niro who then invited the chef to open a restaurant in New York. Partnering with de Niro, Nobu in New York was born and the rest is history.

Other signature dishes will also be on the Nobu Manila menu.

The Black Cod Den Miso, which has been described by the New York Times’ Frank Bruni as “a plump wedge of miso-glazed black cod, the culinary equivalent of a Cole Porter standard, covered and interpreted by so many artists that you may not recall where and when you experienced it first” will be served. The fish here is marinated at least overnight in Nobu’s Den Miso sauce (a combination of miso, sugar and sake) to create a very flavorful fish with a perfect balance of savory and sweet. With its commitment to using the best ingredients, the restaurant is flying in the black cod, known for its buttery texture, from the United States.

The famous Sashimi Salad, a dish that has been recreated by many a food magazine, will be offered as well. It comes in a huge, heavy plate, with seared bigeye tuna sashimi laid out in a circle, outlined with Matsuhisa dressing, and in the middle, a pile of root vegetables, some sliced, some shredded, led by the daikon radish, elaborately presented and reminiscent of a geisha’s coiffured hair.

But the restaurant will not just be a mirror-image of other Nobu restaurants around the globe.

In the spirit of fusion and the commitment to using the best and freshest ingredients, Nobu Manila executive chef Zachary Hillberry has been in Manila for several months now, indoctrinating himself with Filipino flavors and researching on Filipino food. The result: additional items on the menu that cater to a Filipino-oriented palate but using Nobu techniques.

Case in point: the White Fish Dry Miso. It is presented like a carpaccio of our very own Lapu-Lapu, delicately sliced, incredibly fresh, a surprising presentation of a fish we are so familiar with yet have never really appreciated this way. It lies on a sauce that gives a citrusy dimension to the dish and then accented with garlic. It’s the Lapu-Lapu “Nobu-fied”!

Another masterpiece is the Pork Spicy Miso. Micky Fenix and I giggled over this dish as she described it as bite-size lechon kawali … “na may breeding!” I joked. It is a 14-hour braised short rib with jalapeño sauce, refined with onions and cilantro on top. “It’s a three-day process to get the pork to be that tender,” Chef Zachary said, explaining his labor of love.

Sushi will be made by Chef Akihisa Kawai, formerly with Nobu San Diego, now head sushi chef of Nobu Manila. Have a try of the signature sushi, which is like a saucer instead of a roll, and given crunch with a cover of daikon.

For the businessmen closing deals, have a toast with Nobu’s signature sake. It is smooth like Japanese silk and you won’t have a hangover the next day. For the ladies, come pretty as the international male servers look like they came straight out of a casting call for The Bachelor. But they are also smart, prompt, well-versed with the menu and witty. Try not to get tongue-tied! 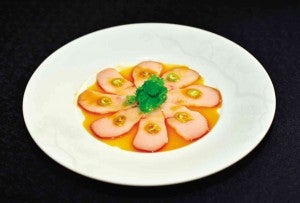 MANILA will soon enjoy signature dishes of Nobu like the Yellowtail Jalapeño.

Just last year, de Niro and Matsuhisa opened the Nobu Hotel in Las Vegas. The Philippines will have the honor of having the first Nobu Hotel outside of the United States when it opens at the City of Dreams Manila early next year.

Nobu Restaurant Manila, meanwhile, will be one of the bigger Nobus, with 335 seats, two private rooms, a sushi bar, floating water cabanas, two Teppanyaki tables and a Chef’s Table. When it finally opens, look for Casper (the Friendly Host), its Texan restaurant manager.

After experiencing that tasting menu, it is easy to understand why members of the A-list kill for a table at this restaurant. Just a few days ago, actor Matthew McConaughey was spotted celebrating his 45th birthday at Nobu New York.

When it opens in a few weeks, diners will undoubtedly be spotting a lot of Manila’s tycoons and A-listers here as well.

Soft opening before the end of the year. Grand opening early next year.

For general inquiries, call City of Dreams 6639888 or e-mail [email protected] (Restaurant details will be announced after the grand opening.)