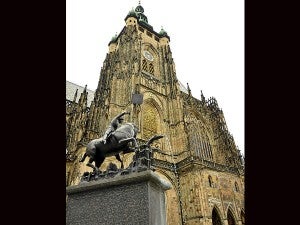 THE ICONIC structure oversaw the coronation of Czech kings and queens

Spirituality resides in every Filipino’s heart. More so if that Pinoy is far from home. During my travel around Europe last month, I met many of our countrymen who never failed to urge me to visit the landmark churches and other places of worship as if these were their second home. And after double-checking these landmark churches with the 512-page “Architectural Excellence: 500 Iconic Buildings,” the structures listed, and pictured, below can truly be said to elevate the passion of worship to divine levels.

You wouldn’t miss this after emerging from the Duomo subway train station of Milan. It’s not just because of the innumerable Pinoys converging in front of the cathedral. It’s also because of its sheer size (being one of the largest cathedrals in the world, able to accommodate 40,000 visitors at a time, and 3,159 statues inside and out), as well as its imposing gothic style.

This was an architectural project that took some 500 years to complete. The record says its architects were “various” and that its main work was completed in 1486. The cathedral played an important role in introducing the High Gothic style, which was pioneered in northern Europe, into Italy, according to “Architectural Excellence.” Given the length of its construction period, the cathedral displays an array of styles—the easter apse is French Gothic, the cupola is Renaissance, while the façade is Neoclassical.

This cathedral is so well-known and attended that summer crowds make it virtually impossible to get a façade shot. Its recorded architects are the renowned Filippo Brunelleschi, Arnolfo di Cambio, Giotto di Bodone and Francesco Talenti. It was recorded to have begun in 1296 and completed in 1436. The style is Italian Goth/Italian Renaissance. The construction was largely prompted by a wealthy Florence’s desire to outshine the new cathedrals that had recently boosted the prestige of rival Tuscan cities.

INSIDE the Basilica, Nice’s largest church

Although not included in “Architectural Excellence,” St. Vitus Cathedral at Castle District, Prague 1, is still a Gothic masterpiece symbolic of the Czech state. The work, commissioned by Charles IV, was begun in 1344 upon the site of an earlier 10th century rotunda. In all, it took nearly six centuries to complete (The final phase of construction only ended during the period 1873-1929).

According to data in the “Prague Experience,” since it is the largest and most important temple in Prague, St. Vitus Cathedral also oversaw the coronations of Czech kings and queens. This writer personally went to the top of the bell tower, out of breath because of the 287-step narrow staircase, and the view.

According to Prague.net, the bell tower is surrounded by notable legends, one which has been that when Emperor Charles IV died, all the bells at the tower started tolling by themselves. Good thing the bells “behaved” properly during my stay there.

A Filipino family whom I met on the road led me to this cathedral, which was about a 15-minute walk from the NiceVille main train station. It is considered to be Nice’s largest church, and its first modern religious building. It actually is pleasant to take pictures of this cathedral at night due to its lighting.

According to Yahoo Travel, unlike most of the churches in the old town, which have been strongly influenced by the Italian baroque style, the lines of this building appear “unashamedly Gothic.” In fact, it’s a reproduction that only dates back to 1868 and was designed by  architect C. Lenormand. The church stands proud and serene in the middle of one of the city’s main thoroughfares, Avenue Jean Medecin.

It is the smallest of the churches that I have visited, but Lonely Planet had dubbed this as one of Pisa’s architectural gems, as it is a fine example of Pisan-Gothic style. This now-deconsecrated church was built between 1223 and 1230 to house a relic of a spina (thorn) from Christ’s crown. Inside, you won’t miss Madonna and Child (a.k.a. Madonna of the Rose, 1345-48), a masterpiece of Gothic sculpture that still bears traces of its original colors and gilding. At the other end of the church is a copy of the graceful Madonna del Latte (Our Lady of Milk, 1343-47), sculpted by either Nino or Andrea Pisano and now occupying pride of place in the collection of the Museo Nazionale di San Matteo.

Prague.net calls it the first Baroque church in Prague, built by Giovanni Maria Filippi in 1613 for the German Lutherans. Originally, it was called the church of the Holy Trinity. After the battle of the White Mountain (1620, Bila Hora), the church was given to the Carmelites as a sign of gratitude for their victory. In 1628 Polyxena of Lobkovic donated to the church a Spanish wax effigy representing the Infant Jesus. It is said that the Infant Jesus of Prague (also known as il Bambino di Praga) has miraculous healing powers, and that it was the protector of the city against plague and the destruction in the Thirty Years’ War.

Built in 1875, this cathedral, particularly its interior, is a sight to behold. Looking more like an art museum than a place of worship, this Cathedral drew me in for its Romanesque-Byzantine style, and for the flower-covered graves of the fairy-tale couple Princess Grace (1929-82) and Prince Rainier III.

Another church, small but also looking like a mini art museum inside, is the church of Eze in southeastern France. It is perched on top of a hill immediately beside the old palace and medieval village.