US expands importation of mangoes from PH | Inquirer Business

US expands importation of mangoes from PH

MANILA, Philippines – The United States (US) has expanded the importation of mangoes from the Philippines allowing mango farms all over the country to export to US. 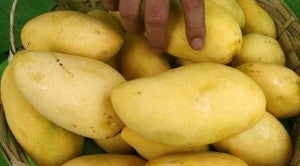 Previously, only mangoes grown in the province of Guimaras can be exported to the US mainland because only these are recognized as free from small beetle-like pests known as weevils.

Mangoes grown from other parts of the Philippines were suspected to have weevils and can be exported only to Guam and Hawaii.

Now, the US Department of Agriculture (USDA) has declared the entire Philippines, except the province of Palawan, as free from pests including weevils.

“The decision to expand the list of allowable mango-producing areas to export to the US to almost the entire Philippines can be expected to result in more investments in the sector and at the same time encourage new entrants to allow domestic production to fully satisfy demand,” Philippine Ambassador to the US Jose Cuisia Jr. said in a statement Thursday.

“Other countries could also refer to this USDA recognition of the Philippines as weevil-free as a basis for adjusting their phytosanitary and importation requirements for our mangoes,” he said.

Provinces, which produce mangoes, like Ilocos Norte, Pangasinan, Isabela, Batangas and Tarlac in Luzon; Cebu and Iloilo in the Visayas; and Zamboanga del Norte, North Cotabato and Davao del Sur in Mindanao may now export their mangoes to the US, Agriculture Attaché Josyline Javelosa said in the statement.

Mangoes produced in Palawan are required to undergo irradiation treatment when being imported into the US mainland to get rid of any pests.

According to the Bureau of Plant Industry, the major regular and lucrative markets for Philippine mangoes are Japan and South Korea, which accounted for 29 percent or 5,363 metric tons of the total Philippine mango export volume of 18,440 metric tons in 2012.

The rest of the country’s fresh mango produce was exported to Hong Kong, China, Singapore, New Zealand, the Middle East and Canada, among other markets.