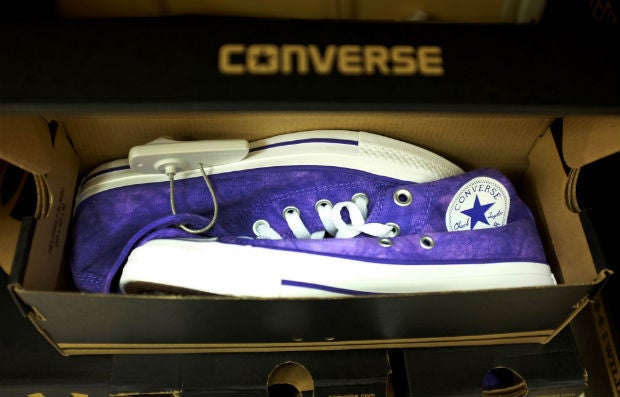 Converse shoes are seen in a store on October 14, 2014 in Miami, Florida. Converse, owned by Nike, announced it is filing lawsuits against 31 companies, accusing them of trademark infringement on its widely recognizable Chuck Taylor shoe. AFP

NEW YORK–Worn by millions all over the world, the Converse sneaker is a slice of Americana beloved by everyone from British public school boys to rap stars, from aged rockers to athletes.

But popularity has a dark side.

Converse Inc. is complaining that more than two dozen companies are knocking off, mass-producing and selling imitations of its legendary Chuck Taylor shoe. And it’s had enough.

On Tuesday, the Nike subsidiary filed lawsuits against 31 companies for breach of trademark. Among the defendants are Wal-Mart, Ralph Lauren Corporation and Tory Burch.

Of the 31 companies, four are based in China, two in Canada, one in Australia, one in Italy and one in Japan.

Converse is also demanding that the International Trade Commission ban imports, distribution, sale and use of imitation Converse footwear in the United States.

“We welcome fair competition, but we do not believe companies have a right to copy the Chuck’s trademarked look,” said Jim Calhoun, president and CEO of Converse Inc.

The Chuck made its debut on US basketball courts in 1917 and since then, Converse says it has sold one billion pairs of the shoe worldwide that bear the Asserted Trademark.

It claims to have spent hundreds of millions of dollars on advertising the shoes, famous for their star, stripes and rubber toe tip, and acknowledges benefiting from extra publicity reaped from books, magazines, newspapers, movies and TV shows.

In one of the suits, Converse demands a trial by jury at the federal court in Brooklyn against Kmart Corporation.