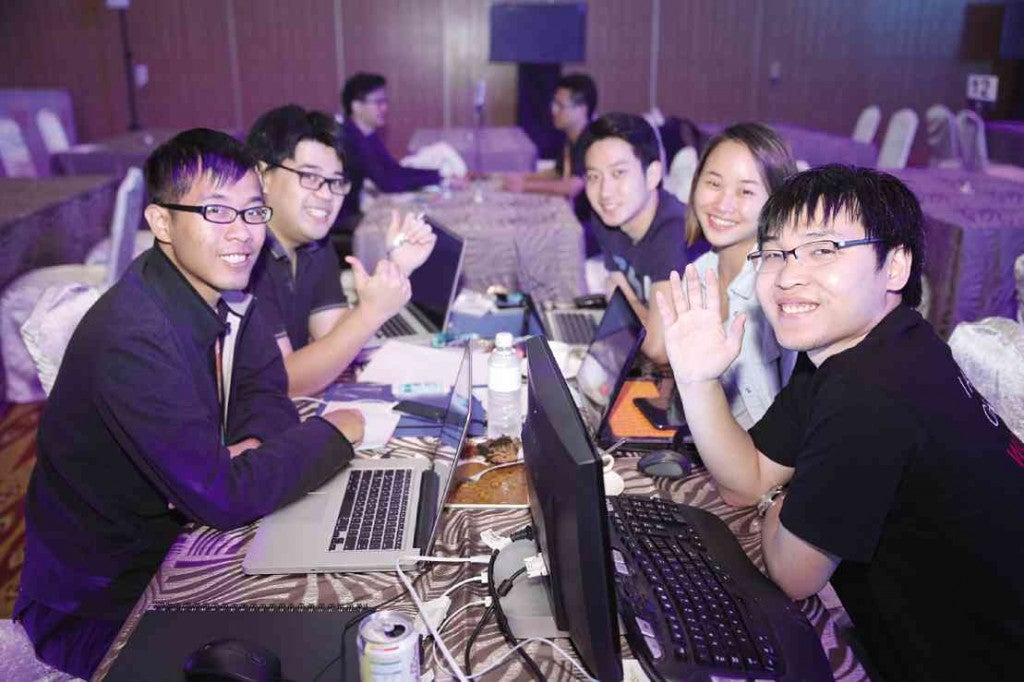 TEAM Hacktivist’s members are all smiles despite staying up for 24 hours straight to complete their app.

That, in a nutshell, is the story of Malaysia Developers Day (MYDD) 2014, a “hackathon” held by communications company AT&T and Malaysia Communications and Multimedia Commission (MCMC) at the Kuala Lumpur Convention Center on Sept. 17-18.

“AT&T has a long history of collaboration and innovation. We’re with the innovators, the proverbial band in the garage, building a new idea that could change the world,” said Jake E. Jennings, AT&T international external and regulatory affairs director. “Events like this one are part of our efforts to keep expanding on the opportunities the Internet creates. This is an opportunity for anyone with a good idea.”

Developers were encouraged to form groups not by country but according to what skill sets they needed for their apps. There were developers who specialized in design, some had more technical experience, while others had a knack for marketing. Participants were encouraged to ask questions from industry experts from AT&T, Microsoft, management consulting firm McKinsey & Company, and marketing agency Fleishman Hillard Inc., who constantly roamed the convention hall to provide any help they could.

There was also a constant supply of food and drinks, gaming stations and even massage chairs to keep the developers energized (and relaxed, if tensions ran too high).

The rules were simple: Code your app at the event venue only; show, don’t tell the audience how your app works (no Powerpoint presentations); and, of course, finish on or before the deadline, which was at 2 p.m. on Sept. 18.

In the end, 21 teams had registered their apps for presentation to the judges, with a couple of developers choosing to fly solo.

After the intense three-minute presentations and Q&A with the judges, three winners, one for each category, were chosen. The winning teams were each awarded $1,000 and six months’ mentorship under Golden Gate Ventures, a venture capital firm in Singapore.

As an added twist, the three winners had to present their apps again at the “KL Converge” gala dinner, where guests got to vote for their favorite.

The grand prize winner, awarded with an additional $10,000, was Enact by Team Hacktivist, which was also the winner under the community involvement category.

Enact basically engages individuals and companies to do charity work through their smartphones. If one chooses to do, say, the ice bucket challenge, he can use the app to take a photo of him performing the challenge, post it online, nominate other friends to do the challenge, and then send a pledge to certain companies who will send a donation on the app user’s behalf.

They are planning to further polish Enact and, hopefully, tie up with companies who can make use of the app.

Rigor has been working in Malaysia for the past four years.

Team Accordia Global created the Air Quality Monitoring System (ARMS), the winning app for the Smart City category, which gauges the level of air pollution in a certain area. 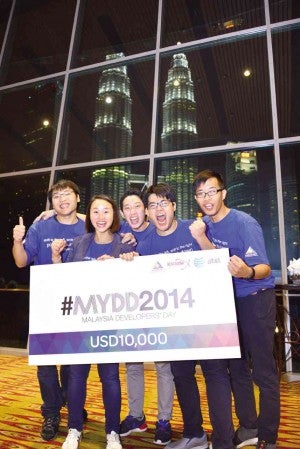 Think Waze but, instead of monitoring traffic, ARMS monitors the level of harmful gases in the air (i.e., butane, carbon dioxide, methane) and alerts the app user through push notifications exactly where the amount of pollution has become too high.

Aside from the app, which the team entirely coded during the 24-hour hackathon, Rigor and his teammates also developed a small device that would serve as a gas sensor (Rigor hopes to develop it into a wearable gadget, like a watch). This sensor would then send a notification to the mobile app via GPS (global positioning system). If there is a high level of air pollution in the area, it will be marked with a red dot on the ARMS’ satellite map.

Rigor and Yeong had been tinkering with the gas detector device for around three to four months prior to MYDD 2014. When the event was announced to the public, the three immediately took the chance to join.

While they had no professional experience in developing mobile apps, Rigor, Yeong and Hue were well versed in IT, having been employed in a Kuala Lumpur company that provided call center solutions.

They came up with ARMS because of the annual haze problem in Malaysia and Singapore caused by forest fires—a disruptive event that would usually last for months. Although the Malaysian government has its own system for monitoring air pollution, ARMS will involve the community because the app has a “share” feature allowing users to let others know how severe the haze is in their respective areas, Yeong said.

“Every government has its own air monitoring stations, but there’s no device yet which people can carry to monitor the air quality in their own homes,” said Yeong. “We can make this a community project wherein every household has this device, and everybody can share their readings on the map [in the app].”

The winner under the commercialization category was Team Pocket Events, composed of Kendrick Wong, Chew Weng Chuen, Lau Cher Han, Goh Hoo Wan and Nikolai Prettner. They created an events-organizing app Pocket Events which could be useful to anyone with a social agenda—from housewives throwing small parties in their homes to big-time professional organizers. The app’s main purpose is to help organizers gather all there is to know about their guests, such as food preferences, allergies, and other personal needs. They can then use this info to anticipate their guests’ needs and create more customized gatherings.

On the guests’ part, aside from informing the host or organizer of their needs, they can also preregister for the event to avoid the usual registration lines, or gets exact directions to the venue.

Of the three winning teams, members of Team Pocket Events were the ones most experienced in mobile app development. They already established a startup company with a shopping app that gathered different shopping sites (think Lazada, Zalora) into one platform, making it easier for users to compare items and prices from the different sites.

Aside from the three winning teams, 12 developers were awarded individual nanodegree scholarships at Udacity, an online educational institution.

While AT&T and MCMC won’t automatically sponsor further improvement of the winning apps, their respective developers can utilize the prize money and newfound network of fellow developers to improve their products and test their marketability.

“This event is about providing a platform for innovation,” said Jennings. “The MYDD is not just about writing code. It’s an intense internship where you develop skills, such as teamwork, problem-solving, creativity, presentation, and, yes, even time management.”