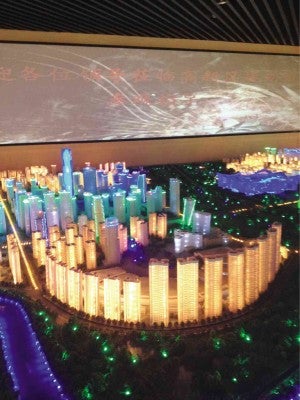 SCALE model of the Chengdu Hi-tech Industrial Development Zone. With an area of 130 square kilometers, the CDHTZ is one of China’s state-level high-tech zones.

CHENGDU CITY—Holding an iPad or a laptop right now? There’s a chance that the unit you’re holding is from this city, whose high-tech zone boasts of producing half the world’s iPads and laptops, and most of the available applications in the iOS and android platforms.

A talented workforce, reduced taxes, efficient transportation systems and cheap, government-subsidized electricity—these are what make Chengdu City, capital of China’s Sichuan Province, attractive to investors, says Thomas Tang of the Chengdu Hi-tech Industrial Development Zone, one of the largest high-tech areas in China which is comparable to Silicon Valley in the United States.

“Ten years ago, these were just farmlands,” he said. “Chengdu used to be a remote city, but not anymore.”

In fact, he adds, the city’s efficient transportation system is one of the city’s main “come-ons” for foreign investors. For example, iPads are transported on Boeing airplanes and high-speed trains every day.

“Once you work here, you may never want to leave,” says Tang, as he points to Intel’s biggest factory also located in Chengdu. “No matter what mobile you use, whether it is iOS or Android, most of the software on those platforms are also produced by companies here.”

The zone currently employs around 47,000 software engineers, some of whom come from the United States, Europe and India. Apart from software production, the zone is also home to several banks and financial companies, as well as outsourcing services.

By end-2011, over 100 of the world’s top global 500 companies had established operations in Chengdu’s Hi-Tech Zone.

To continuously attract investors, Chengdu has also set special government policies to support the development of software and service outsourcing industries. These include leasing subsidies for offices, settlement subsidies and government grants to attract and retain talents, and tax breaks, such as reduction or exemption from enterprise income tax, value-added tax rebates, business tax exemption, tariffs and value-added tax for imports.

“We are also surrounded by rivers, which supply the city’s electricity. So, our electricity is cheap,” Tang adds.

When asked if Chengdu would be willing to train Filipinos in advanced technologies, Tang replied that it would be a “good idea.”

He says Chengdu may also learn a lot through sharing and exchanging experiences with Filipinos.

“We look forward to cooperating with the Philippines again soon,” he says, citing technology-related programs China carried out with the previous administration.

The briefing on Chengdu was part of the Philippine Media Southwest China Cultural and Economic Familiarization Tour. The tour also covered the provinces of Guangxi and Hainan.