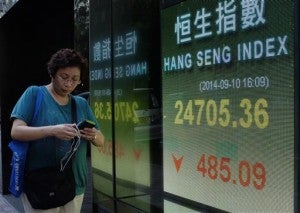 A woman walks past an electronic board of a local bank showing the Hong Kong share index in Hong Kong Wednesday, Sept. 10, 2014. Global stocks sank under the weight of worries about the possible timing of a U.S. rate hike, economic weakness in China and an impending referendum on Scottish independence. Hong Kong’s Hang Seng fell 1.9 percent to 24,705.36. (AP Photo/Vincent Yu)

BANGKOK— Hong Kong stocks fell further Friday as pro-democracy protests entered a second week but most other Asian markets rose ahead of reports on U.S. employment and factory orders.

HONG KONG: Stocks fell further despite the chief executive’s offer of talks with protesters who oppose plans to require candidates for the 2017 election for the territory’s leader be approved by a panel dominated by pro-Beijing business leaders. The protesters say the communist government is reneging on a promise of “universal suffrage.” Stocks in retailing and tourism have been hardest hit after some shops closed and Beijing suspended group tours from the mainland.

U.S. JOBS: Investors looked ahead to U.S. Labor Department data due out Friday that were expected to show employers added 215,000 jobs in September, but analysts say that might be too little to improve investor sentiment. Forecasters expect a separate report to show unemployment claims rose by 5,000 last week to 298,000. The Commerce Department was due to report August factory orders after July showed the biggest one-month gain since 1992.

EUROPE: Markets were disappointed after the European Central Bank said it will buy bonds to stimulate demand but failed to announce a size for the program or purchases of sovereign debt. Bank president Mario Draghi said the programs should help the ECB achieve its price stability target. Bond traders who bet on sovereign debt buying unwound their positions. Germany’s Dax index lost 2 percent and France’s CAC-40 fell 2.8 percent.

ENERGY: Benchmark U.S. crude fell 18 cents to $91.19, extending a multi-week slide following OPEC’s announcement it will keep production at current levels despite a global supply glut. The contract had rebounded Thursday, adding 28 cents to close at $91.01.