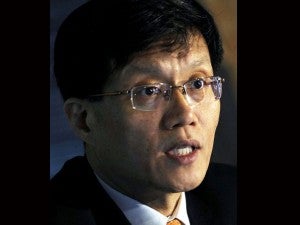 MANILA, Philippines–The International Monetary Fund (IMF) is urging the Philippine government to fast-track infrastructure spending and open up the sector to wider competition, including foreigners, in order to sustain economic growth in the long term.

Changyong Rhee, the multilateral lender’s director for Asia-Pacific, told a press conference held at the Bangko Sentral ng Pilipinas (BSP) on Thursday that the Philippines was well positioned to weather any effects of a potential interest rate increase by the United States post-Federal Reserve tapering.

The IMF was still keeping its growth rate forecasts for the Philippines of 6.2 percent for 2014 and 6.5 percent for 2015 ahead of updated projections to be released in the first week of October, Rhee said. “At this moment, we believe the Philippine economy is still on a good track to achieve the 6.2-percent goal (for this year).”

As for the growth forecast for 2015, Rhee said that next month’s update would put into account emerging “uncertainties in the global economy, especially the possibility of interest rate increase in the United States and geopolitical tensions,” which had resulted in increasing downside risks.

Rhee pointed out that an increase in US interest rates expected by early next year or even earlier would bring up cost of financing, which could have some impact on growth rates.

Still, the Philippines as well as other emerging Asian economies are poised to be in a better position to withstand the higher US rates as capital flows had been recently returning to the region, he said.

In the Philippines’ case, Rhee said its economy has had a “stellar performance” thus far on the back of “good financial and macroeconomic conditions.”

“In the short term, macro-management is in a good shape,” the IMF official said.

The economic expansion being enjoyed by the country, however, might not be sustained if structural reforms were not implemented, especially in infrastructure development, fiscal management and poverty alleviation, Rhee said.

“The issues are for medium- and long-term growth. The Philippine government should address inequality, expedite infrastructure investments and implement fiscal reforms to widen the revenue base,” he said.

In the case of infrastructure, Rhee noted that disbursement for the sector has slightly slowed down.

“The IMF’s recommendation is we encourage [the Philippine government] to slightly increase the budget deficit up to 2 percent to enhance the infrastructure investment.”

It also did not help that structural bottlenecks were delaying the rollout of projects that were mostly part of the Aquino administration’s centerpiece public-private partnership (PPP) program, he said.

Rhee said one hindrance to infrastructure development was the “lack of competition.” For Shanaka Jayanath Peiris, the IMF’s resident representative to the Philippines, lifting restrictions on foreign participation in infrastructure projects would foster competition.

Rhee also advised the government to “pick good projects which can be viable with small incentives to the private sector” in order to make the PPP initiative work while minimizing fiscal leaks.

The IMF official has been in the country since Tuesday and will be here until Thursday to meet with BSP and finance officials.