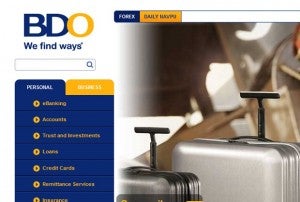 MANILA, Philippines—The country’s largest lender BDO Unibank Inc. has gained a foothold in South Korea to position itself to capture new business from Koreans who are keen on investing or living in the Philippines.

In a press statement, BDO announced that it had opened a representative office at the Seoul Finance Center right at the heart of Seoul’s premier business district. With Koreans now leading tourist arrivals in the Philippines and likewise rising to be among the country’s largest investors, the bank deemed it timely to establish a physical presence in Korea.

The BDO representative office in Seoul is manned by Korean nationals who can respond to any BDO-related inquiries and make the appropriate arrangements with the bank’s Philippine corporate headquarters should interest arise, according to the BDO statement.

Apart from assisting the banking needs of Koreans who wish to enter the Philippines as an investor or resident, BDO’s interest in the Korean market is also fueled by its objective to expand its overseas network to provide support to the overseas Filipino workers (OFWs), provide trade support for import and export clients, and gain access to one of the region’s key capital markets.

“South Korea is one of the priority markets for BDO because of the strong bilateral economic and people-to-people relationships between the two countries,” BDO said.

In its home market, the BDO also earlier launched a new service targeting Koreans residing in the Philippines as a niche market for inbound remittances. This new service, which is offered in partnership with two of Korea’s biggest financial institutions, will allow Korean nationals to receive remittances from Korea “fast and at reasonable costs.” The partner banks are Kookmin Bank and Hana Bank.

With this remittance platform called international remit account or IRA, which started only last March, Korean nationals can tap BDO’s extensive branch and automated teller machine (ATM) networks as pick-up channels for money wired by relatives through its two Korean banking partners. The IRA will let the Korean beneficiaries have the remittance credited to their accounts on the same day and also enjoy lower inward remittance fees versus the average prevailing industry charges.

The Korean government currently allows its citizens to wire as much as $50,000 annually to overseas markets without tedious documentation. With documentation such as report to tax collection agency, they can remit as much as $100,000.

Read Next
Hyundai Motor to pay $9.6 billion for Gangnam land
EDITORS' PICK
World-standard accounting: Unlocking your financial potential
Defend Your Health! Shop health essentials from home with Rose Pharmacy’s Online Sale
Chatting with companions, answering calls on MRT 3 trains banned
Water remains our saving grace right now
COVID-19 wards in 2 more hospitals reach full capacity
Navotas will be on lockdown from July 16 to 29 – Tiangco
MOST READ
‘I am not my father,’ says daughter of lawmaker who voted to deny ABS-CBN franchise
In slap on face of PH, China replies to Locsin on tribunal ruling: It’s invalid
Vilma Santos-Recto ‘prepared’ to face ‘consequences’ over ABS-CBN franchise vote
Did a meme get on Agot Isidro’s nerves? She’s asking ’24 Oras’ to fact-check it
Don't miss out on the latest news and information.