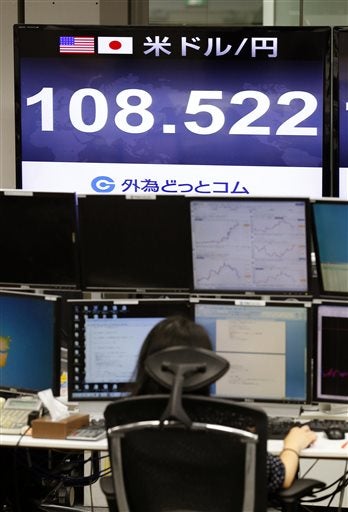 A money trader of a foreign exchange dealing company works under an electric screen indicating the U.S. dollar against the Japanese yen in Tokyo Thursday, Sept. 18, 2014. The U.S. dollar hit its highest level against yen in six years. AP

EOUL, South Korea — Asian stock markets mostly fell Thursday after the US Federal Reserve increased its estimate for the level of the central bank’s benchmark interest rate by the end of 2015, surprising investors who expected a slower pace of rate hikes.

The Fed statement kept its “considerable” wording in reference to how much time would elapse before it starts raising interest rates but raised its estimate of what the Fed’s benchmark interest rate should be at the end of 2015: to 1.38 percent from 1.13 percent decided at its June meeting.

The Fed has kept its benchmark rate at a record-low level near zero since the 2008 financial crisis to support economic recovery; the super-easy monetary policy has also boosted stock markets. Most economists expect the first rate increase to happen by the middle of next year. Before the Fed’s meeting, there was speculation the Fed might signal an earlier start to rate hikes.

“The 2015 median rate forecast suggests that the Fed will have to hike by June at the latest, with a hike in every meeting thereafter,” Mizuho Bank said in a daily commentary. “This was a marked surprise to markets, which was looking to a slower pace of hikes.”

Asian tech giants were among the biggest losers of the day. Sony Corp. dived 10 percent after forecasting its annual loss would swell to $2.15 billion, citing a writedown of its mobile business amid intense competition from Chinese rivals. The once iconic Japanese company cancelled dividends for the first time in more than five decades. Samsung Electronics Co. fell as much as 2 percent in Seoul even though it pushed forward the launch schedule for the Galaxy Note 4 smartphone in its home market.

Benchmark U.S. crude was down 65 cents to $93.77 a barrel in electronic trading on the New York Mercantile Exchange. The contract dropped 46 cents to settle at $94.42 on Wednesday. The price of oil fell after the Energy Department reported a 3.7 million barrel increase in U.S. crude inventories last week. Most analysts had expected a decline, which is typical for this time of year.

US stocks hit record as Fed holds to easy-money policy