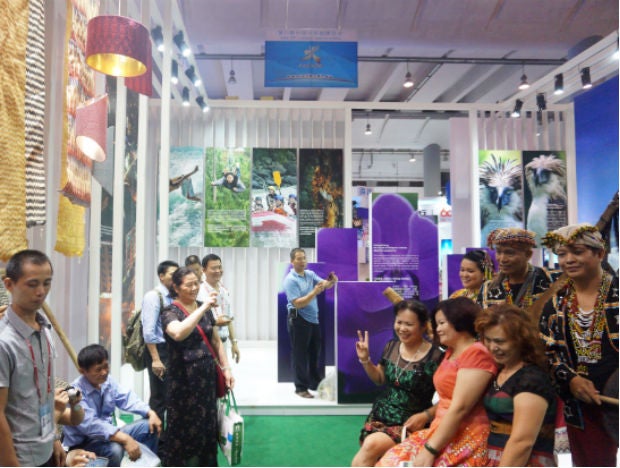 Visitors flock to the Philippine booth and pose for pictures with Davao-based cultural group Kaliwat Theater Group at the 11th China Trade Expo in Nanning City. Davao has been featured as the City of Charm in the event from Sept. 16-19, 2014. FRANCES MANGOSING/INQUIRER.net

The Davao region was featured as the City of Charm at the 11th CAExpo held from Sept. 16 to 19 here – an opportunity to attract investors from China and Asean countries.

“We only have three performers but once they perform, they gather an audience,” said Doris Gacho, Project Manager for Department of Trade and Industry’s Center for International Trade Expositions and Missions.

Cities of Charm are chosen cities or provinces across China and Asean countries where they are given a chance to pitch for investments.

“Agriculture is one of their top industries and tourism as well,” Gacho said of Davao.

A primer handed out to the media described Davao as the “Fruit Basket of the Philippines.”

The Philippine Eagle, an endangered specie, and Mt. Apo, the Philippines’ tallest mountain, are located in the region.

“Davao is considered as the key player in the economic and trade association Brunei-Indonesia-Malaysia-Philippines East Asean Growth Area or BIMP-EAGA, and has the biggest urban market among its members,” the primer said.

Priority investment areas in the region aside from the agriculture and tourism sectors are light manufacturing and assembly, property development, health and wellness, educational and sports facilities, environmental protection or green projects, information and communications technology, generation of new sources of energy, transportation and infrastructure and public-private partnerships.

Gacho said that each year, they looked at areas interested to be featured for the CAExpo.

“We look at regions that are not yet tapped. We write to them,” Gacho said.

Last year, the province of Isabela was featured as the City of Charm. For next year, Gacho said they would invite Zamboanga.
“The ultimate objective of coming here is to promote and encourage investors to come to the Philippines,” Gacho said.

The other Cities of Charm in this year’s participating countries were: Ningxia Hui Autonomous Region of China, Bandar Seri Begawan of Brunei, Preah Sihanouk Province of Cambodia, South Sumatera Province of Indonesia, Borkea of Laos, Langkawi of Malaysia, Yangon of Myanmar, Singapore, Nakhon Si Thammarat of Thailand and Binh Thuan Province of Vietnam.

‘Bato’ to ABS-CBN workers in danger of going unemployed: Just find other jobs