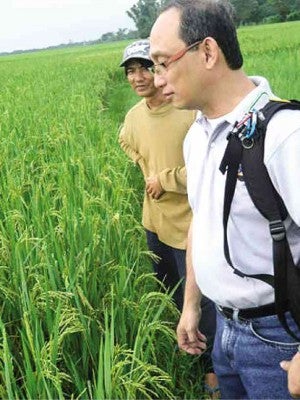 PAGASA senior weather specialist Anthony Lucero (foreground) and farmer Homer Bucad learn from each other during as field work.

On a Wednesday morning in late July, rice fields in Barangay Sto. Domingo of Gerona town along the Tarlac River are wet, thanks to light showers.

The rains have come late this year, unlike the year before when people were praying hard so that the Habagat (southwest monsoon)-borne downpours would stop.

Earlier this year, international climate monitoring agencies have warned of a possible onset of the El Niño weather disturbance in the fourth quarter this year until the first quarter of 2015.

The Philippine Atmospheric Geophysical and Astronomical Services Administration (Pagasa) itself talked of stronger typhoons in the runup to a period of drier conditions and decreased rainfall.

As of Aug. 25, the latest word from the Climate Prediction Center of the United States’ National Weather Service is that the chance of El Niño occurring in the remaining months of the year was about 65 percent. This was a little better than the 70-percent probability that was being quoted in June.

In light of this development, the Philippine Rice Research Institute (PhilRice) has called on farmers to plant “El Niño-ready” rice varieties.

PhilRice came out with a list of “early maturing” and “drought-tolerant” rice varieties, including the “Pagsanjan,” “Tubigan 4,” and “Tubigan 14” for irrigated lowland areas, and the “Pasig,” “Apo” and “Katihan 1” for upland farms.

According to the agency which is supervised by the Department of Agriculture, the rice breeds are best for areas that are deemed most vulnerable to El Niño, which includes Tarlac.

However, in Sto. Domingo, some of the tillers continue to rely on their innate relationship with the environment as they adopt a climate-informed approach to farming.

On that showery morning, about 15 farmers were engaged in a session called agro-ecosystem analysis (Aesa), which involves observation, data recording and analysis on how factors like the environment, nutrients, pests and insects, weather and climate, and farming practices affect the stages of crop development.

They comprise the latest batch of trainees under a program called Climate Resiliency Field School (CRFS), which entails 16 weekly sessions meant to help farmers adapt to changes in climate as well as to make farming sustainable.

Through the Aesa sessions, the farmers are expected to come up with sound farm management recommendations which they themselves can test and validate.

“Farmers are inherently responsive to changes in their agro-ecosystems even if they lack the capacity to explain such changes fully,” says Jean Lugasip, a coordinator with the nongovernment organization Rice Watch and Action Network (R1).

In partnership with the local government of Gerona, R1 first initiated the CRFS in 2011, with the help of other NGOs and Pagasa.

The program’s rationale is that, to leverage their innate knowledge, farmers need to be given access to appropriate technologies as well as timely and localized climate forecast information, Lugasip explained.

Meanwhile, the Department of Agriculture has put in place policy initiatives, water management and conservation measures to cushion the effects of El Niño.

These measures also involve the promotion of modern farming technologies among rural folk, like the so-called “alternate wetting and drying” style of rice cultivation, giving out shallow-tube wells and ramping up cloud-seeding sorties.

But Pagasa senior weather specialist Anthony R. Lucero, who is a regular resource person in CRFS sessions, disagrees with the practice of cloud seeding.

“That is meddling with nature,” says Lucero, who is officer in charge of Pagasa’s Climate Monitoring and Prediction Section. “For me, personally, what should be done instead is to ensure that food supplies and other resources from areas spared by the drought are made available to harder-hit areas.” 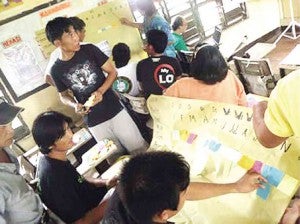 He agrees that farmers need to be trained in managing climate risk in their own terms, which allows them to adjust farming decisions based on localized weather and climate information. That is not what farmers get when they rely on radio or television which, at best, provide regional data.

“Learning that heavy rains are expected in Central Luzon or even ‘in the area of Tarlac’ is actually not very helpful,” says Rodelio Taberna, Gerona’s Agromet observer.

Taberna used to work as one of the drivers of Municipal Hall. But after training with Pagasa experts through the CRSF, he now mans the town’s very own weather station.

Housed in a bungalow-type structure surrounded by croplands in Barangay Tagumbao, the Gerona Agromet is equipped with an Automatic Weather Station (AWS). As the AWS is linked to national and international weather and climate monitoring agencies, the “big picture” information is reconciled with local observation.

Based on that, the Agromet observer sends out 10-day forecasts and corresponding advice on what impact the weather may have on farms and what activities are recommended.

Taberna posts the forecasts and advisories on a billboard at the municipal agriculture office at the town center.

He also posts the information in Gerona Agromet’s own Facebook page and sends out text messages for people asking for information.

For example, farmers hold off spraying against pests on a day when it is expected to rain. A sunny forecast means it is a good idea to go ahead with drying seeds.

Looming heavy rains or even a typhoon may also prompt farmers to go for a mechanized harvest than risk having their crop wiped out entirely.

“Even the non-farmers regularly check us out on the billboard and on Facebook,” Taberna says. “Also, some farmers here have access to even the simplest feature phones. They don’t have to make the trip to the town center to get weather information.”

At the mercy of weather

As one of the first graduates of CRFS—or “adapters,” as R1 calls them—Junior Aguilar now leads a different lifestyle.

The 42-year-old former overseas worker is now a full-time tenant that tends to a three-hectare farm.

“With the help of what I have learned [through the CRFS], my harvest is no longer fully at the mercy of the weather and climate,” Aguilar said.

With CRFS-guided farming experience over the past three years, Aguilar was able to identify the best seeds to use. Not only did harvest improve, the engineering graduate has leveled up to growing seeds—that is, grains for planting instead of milling.

Aguilar favors a rice variety that locals call “sampaguita,” which is not certified and does not require particular inputs such as commercial fertilizer.

As part of CRFS training, farmers are also given the option of using natural farming methods or non-chemical fertilizer.

Homer Bucad, 46, is also an adapter and has taken to multi-cropping and organic farming. He said he found that these methods make sense, especially with his farm holding of only a hectare.

Bucad used to work in a bakery, but took over his father’s tenancy when the latter became too old to continue working the field.

“I grow four rice varieties—magnolia, sampaguita, jasmin and malagkit (glutinous),” he says. “Although my farm is not certified organic, my buyers know how I grow my rice because most of them are my townmates.”

Bucad realizes that, because his farm has no access to irrigation infrastructure, it’s better to try other crops than to insist on planting rice again during the dry season.

“I grow singkamas and monggo instead,” he said. “Fuel for a shallow-tube well is expensive. Besides, the monggo helps enrich the soil for the next rice crop when the wet season comes again.”

According to Milagros Pacheco, the municipal agriculturist of Gerona, during the last occurrence of El Niño, many farmers in Gerona were not able to plant at all. “Now there’s a guide for farmers and they can adjust not only the timing but also which crops to grow.”

She says that, before training with the CRFS, farmers relied on practices that they got used to—such as planting at the same time of the year even if, weather-wise, it was not advisable.

“If El Niño does occur this year, farmers may or may not have a hard time depending on how they manage their farms,” Pacheco adds. “But it is certain that they will improve their knowledge and will be better prepared for the next long drought.”