THE 1881 Perique blend comes in the torpedito size.

A new and distinct aroma is filling select cigar divans and smoking lounges in the United States, and it is coming from the 1881 Perique, the newest in the revered line of cigar brands produced by the 133-year-old Tabacalera Incorporada, the only company in the world that has successfully blended the rare Perique from the St. James Parish in Louisiana into a cigar.

Described in Smoke Magazine by reviewers as “a good morning or early afternoon, ‘relaxing on the deck’ cigar” with a “perfect draw” and a “good burn,” the mild-bodied cigar with “musty notes and hints of earthiness” with a “long spicy finish” is made from 15-year-old vintage tobacco from the Philippines and Brazil, and wrapped with premium leaf from Indonesia with fillers from Brazil, the United States and also from the Philippines, which was taught to produce tobacco by its Spanish colonizers.

For Yuan Ongpin, president and general manager of Tabacalera, the Perique line promises to “revolutionize” the character of Philippine cigars.

Ongpin tells SundayBiz that Philippine cigars, including the world-renowned Tabacalera, Alhambra, 1881 and Don Juan Urquijo produced by Tabacalera, have always been known to be quite mild.

By incorporating the stronger Perique into the traditional Tabacalera cigars, a whole new line and flavor profile is created, thus giving the market stronger and more flavorful cigars to enjoy.

Perique is again catching the world’s attention because of its unique flavor. 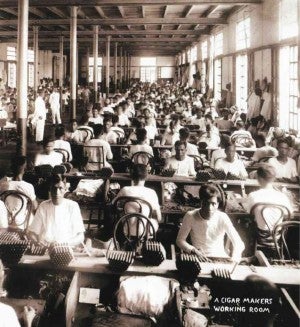 Despite being known as a difficult leaf to blend, Tabacalera
Incorporada hasmanaged to make a premium blend using Perique tobacco leaf (grown in Louisiana, and aged in old whisky cask) that still possess an effortless draw,cool  smoke, and a nice even ash.

Introduced by the Acadian Indians who fermented tobacco in tree stumps, the process evolved in that Perique is now pressure fermented in old whisky casks for at least a year for the full flavor and power to develop.

It gained a name among pipe smokers as the Perique leaf has been known to be too difficult to blend for premium cigars.

That is, until Tabacalera came into the picture.

Ongpin shares that he regularly attends cigar shows around the world as part of his duties as Tabacalera GM. It was during one of those cigar shows where he got into a deep discussion with North Carolina businessman and tobacco connoisseur Mark Ryan, whose company distributes Tabacalera’s cigars in the United States.

As fate would have it, Ryan’s North Carolina-based company had bought the last perique producer, the L.A. Poche Perique Tobacco Co., in 2005 and revived production, attracted by what Ryan deemed was the great potential for revival of what was a dying product.

“When he came in and bought the company, there were only a few barrels of Perique left. He revived the whole thing. During one show, Mark and I were just shooting the breeze. He told me that our cigars were great. Then we hit upon the idea: Why not put the Perique in a cigar?,” Ongpin says, “I thought the Perique would blend well with Philippine cigars.”

Actually putting Perique in a cigar, however, is far easier said than done, Ongpin stresses.

It has to be handled with care because of its strong flavor. Too much and the cigar smoking experience quickly transforms from pleasure to pain. Put in just the right amount with mild cigars that Tabacalera is known for and the result is what Tabacalera considers to be a quality blend that can hold its own against its many competitors in the market.

The secret is in the construction of the cigar, Ongpin says, and that means getting the best leaves from around the world, including the Philippines, and rolling them just right to make the perfect cigar. And construction is a skill that Tabacalera has long been known for. 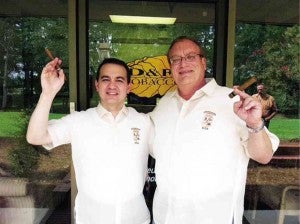 “To this day, people still rave about the quality of cigars made by Tabacalera. The quality is very consistent,” says Ongpin.

It is a quality born out of a tradition since the founding in 1881 of the Compania General de Tabacos de Filipinas or simply Tabacalera. The company went through several corporate upheavals through the years until the cigar-making unit was bought by the group of former trade minister Roberto V. Ongpin in the 1990s.

Now known as Tabacalera Incorporada, it has kept the proud 133-year-old tradition of producing hand-rolled cigars alive and well.

“There are three things about our brand. One is the heritage, second is that we source the best tobacco we can find all over the world to create blends that are worthy of the name. And third, we are the only cigar brand that has been recognized abroad in cigar reviews. We have the actual ratings. In a rating system where it is very rare to have a grade of 93, we get 88-89. Our newer cigars have been reviewed very positively in magazines abroad,” says Ongpin.

The Tabacalera Gran Reserva, for example, which was produced to mark the 130th anniversary of Tabacalera, was given a “superior” rating of 95 by one reviewer, who described The Tabacalera Gran Reserve Robusto, with fillers from the Philippines, Brazil and the Dominican Republic, binder from Brazil and wrapper from the Dominican Republic, as a cigar that he “would share with my friends, especially for a midday smoke.” It was also described as a “medium body cigar with a grassy and earthy taste that builds and finishes with hints of cocoa and coffee.” The cigar was also said to be “rolled well with no soft spots. The draw was perfect and produces the average amount of smoke”.

The Tabacalera Gran Reserve is so special to the company that there are only three cigar rollers who have the skills necessary to prepare the blend that Tabacalera describes as “one of the smoothest and most sophisticated” ever released from its factory.

These three rollers, Ongpin says, are among those who were taught by the late Alfredo Salinas, known as a master cigar maker, and met his exacting standards.

It is this same tradition for meticulous attention to quality and excellence that Tabacalera is injecting into the Perique line that begins with the 1881 Perique, which costs about $8 each, a fraction of what other premium cigars from Latin America cost, which is about $35 each.

“The Perique is changing the whole face of the company as it has gained a real following. Perique long had a cult following among pipe smokers in the United States. Now we are the only manufacturer in the world producing the Perique cigar because of our unique skill set,” Ongpin says.

“We are also lucky because Philippine tobacco is quite light and mild. Then you have this strong and powerful and unique and rare tobacco. At the end of the day, it blended perfectly with Philippine leaf. And because our cigar blenders and rollers are so good, we created a perfect marriage and we are extremely proud of it,” says Ongpin.

1881 Perique was officially launched in July 2013 and more cigar smokers have been raving about its quality.

The focus is on the global market, especially in the United States, the world’s biggest market for premium cigars. Tabacalera produces about 3.5 million cigars of all sizes annually and this year, Ongpin estimates that exports, which account for 30 percent of its volume, will grow at “a good clip.”

But as it develops more variants of the cigars with Perique, Ongpin stresses that the company will not lessen its attention on its flagship brand Tabacalera, Alhambra (which is known as one of the top 20 cigar brands in Spain in its price category) and premium brands 1881 and Don Juan Urquijo.

“Tabacalera for us still has the most worldwide brand appeal and also remains very strong locally,” says Ongpin.

Tabacalera, after all, has always been known as the Manila Cigar and is one of the world’s oldest cigar brands.

The global cigar market, however, is in the mood for something new and Ongpin is confident that the Perique line of Tabacalera will satisfy the craving.

“The Philippines’ cigars have always been known for quality but have been kind of a sleeper cigar. That is why we feel that we have to take Philippine cigars beyond what they are, which are light and mild cigars. With Perique, we are bringing a whole new face and reputation to Philippine cigars,” says Ongpin.