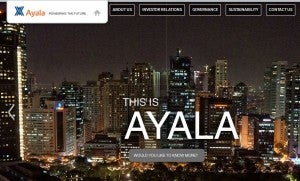 MANILA, Philippines–Storied Philippine conglomerate Ayala Corp., which is celebrating its 180th year of operations this year, has again landed on Forbes Magazine’s “Fabulous 50” roster of the best big public companies in Asia-Pacific.

This year’s honor roll of Asia-Pacific’s biggest publicly traded enterprises is dominated by companies from China, India and South Korea.

Ayala is the only company from the Philippines that landed on this year’s roster.

Forbes Magazine noted in its latest issue that Ayala, which was twice included on the “Fab50” list, had its “hands in everything from real estate to telecoms.”

The magazine noted that Ayala was building a coal-fired plant in northern Mindanao, due to be completed by 2018 and was preparing to bid for more public-private partnership (PPP) projects to develop infrastructure.

“With a 180-year history, it’s the country’s oldest, and largest, conglomerate,” the magazine said, noting that company chair emeritus Jaime Zobel de Ayala and his family had built a $3.4-billion fortune.

This year, Forbes said the brightest on the list was India’s HDFC Bank, which has made the list eight times, more than any other company since the magazine started compiling this roster in 2005.

Melco Crown has a Philippine unit that ventured into a partnership with the SM group to develop integrated gaming resort City of Dreams Manila, which is set to open within this year.

Forbes Magazine explained that the “Fab50” was chosen from a pool of 1,300 companies in the region with at least $3 billion in market capitalization or annual revenue.

“Since only public companies are considered, hot privately held outfits such as Alibaba Group and Huawei Technologies are out,” the magazine said.

Japan did not have any representation on this annual list in the last two years but this year, it has two–Suntory Beverage & Food and Unicharm–both of which are newcomers.

Like in the past three years, China had the most companies on the list, but its representatives dwindled to 16 this year from 20 last year and 23 the year before.

Forbes explained that the real estate slump in China had knocked off all the property developers that would have otherwise made the list.