A budget boon for jet-lagged traders 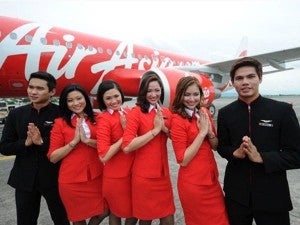 For AirAsia and its head honcho Tony Fernandes, services must be made affordable and accessible to more consumers.

To grant “flexibility to discerning business travelers,” AirAsia has unveiled “Premium Flex,” which its chief executive Fernandes says will primarily benefit small and medium entrepreneurs who always have to be on the go.

Those who will avail themselves of Premium Flex for just a little added cost may enjoy a complementary 20-kilogram baggage allowance as well as flexibility to change their flights at least twice with no change in fees. Also, Premium Flex users may pick premium seats and avail of Xpress boarding and baggage services.

“There is growing demand for business travel and we are excited to offer a truly relevant and high valued travel experience deeply appreciated by business travelers. With unpredictable schedules that business travelers keep, Premium Flex offers peace of mind and convenience to change their flights at their fingertips via their computer or handheld devices. It is the best deal in town as we offer the lowest fares while providing services and products of the highest quality,” AirAsia group head of ancillary Kenny Wong says in a statement.

The budget airline has also announced that it will launch low-cost Wi-Fi onboard services before the year ends.

“A range of Wi-Fi products including Instant Messaging, e-mails as well as content streaming will be made available gradually on all AirAsia flights with the AK flight code (Malaysia AirAsia). It will be introduced throughout the AirAsia Group, including AirAsia Philippines, progressively,” the carrier says in a separate statement.

Fernandes says he is “very proud and happy that our staff continues to push the boundaries” of innovation.

In an interview, Fernandes aired his concerned over the supposed “unfair treatment” of his airline in the hands of Philippine airport authorities.

“I’m disappointed with the pace of change [in the Philippines]. I think you have a good government; they mean very well. But I don’t think AirAsia is being treated fairly in a lot of sense,” Fernandes says.

According to Fernandes, first of AirAsia’s woes is the dilapidated state of Ninoy Aquino International Airport’s Terminal 4, or the “old domestic terminal.”

About four-fifths of AirAsia flights to and from Manila go through Terminal 4.

“We are getting very inferior service at Terminal 4, yet we are paying the same. It’s not right,” he says. “I don’t mind operating in Terminal 4, but charge us appropriately.”

Also, AirAsia continues to fail in its attempt to increase its presence at Terminal 3, Fernandes said.

“We’re being blocked. I think the big airlines put a lot of pressure on airport authorities,” he claims.

Fernandes also lamented the slow action of Congress on moves to formally change the name of the Philippine subsidiary from “AirAsia Zest” to “AirAsia Philippines.”

“The Lower House has approved it, but the Upper House is sitting on it. Why is Congressional approval taking so long?” he asks.

Fernandes explains that a change in name will benefit not only AirAsia as a brand, but also Philippine tourism.

Fernandes says he suspects intense competition in the budget airline space as a reason behind the challenges now facing AirAsia’s Philippine operations. He hints that a competitor may not be playing fair.

It does not help that AirAsia’s pleas seem to fall on deaf ears as far as the Philippine government is concerned, Fernandes says.

“I thought those days were gone in the Philippines. That’s why, as a foreign investor, I invested. I think the Philippine government is very fair; the President and the government officials were very professional. But sometimes, they’re not given all the information,” he says. “We’re struggling to get plane capacity, slots and approvals. There’s so much bureaucracy.”

Despite these setbacks, Fernandes says AirAsia will “not give up” on the Philippine market.

“We just want to keep what we have at the moment and make money with what we’ve got. If we are treated fairly, we could put a lot of investments into the Philippines, create more jobs,” Fernandes says.

He also says that he is seeking a dialogue with top-level government officials, such as President Aquino, and will fly to Manila “anytime they want to see me.”

In the end, Filipino travelers will become the biggest losers when they are faced with limited choices, Fernandes explains.

“If you’re left with one to two airlines, Filipino consumers will suffer,” he says.

On a personal level, Fernandes has a warm spot for his Filipino employees, and is said to be amazed by Filipinos’ resilience especially in times of hardship.

That is why, among the things he wants to do before he dies, he wants to put up low-cost hospitals in the Philippines and his home country, Fernandes reveals.

“I think the price difference between a private hospital and a state hospital is massive. In a country like the Philippines, a low-cost hospital has a wonderful opportunity. There’s so much talent, so many good Filipino nurses and doctors,” he notes. “I want to create a hospital that costs a little bit more than government hospitals, so a lot of people can afford it.”

Fernandes points out that most government hospitals are beset by long queues of patients who want to avail of free or discounted services.

“In every country in the world, government hospitals are full because there’s so much demand and the system can’t take it,” he says.

By establishing low-cost hospitals in the Philippines in the future, Fernandes also hopes that it will provide jobs to Filipino medical professionals.

“The saddest thing in the Philippines is that people have to leave their country,” he says.