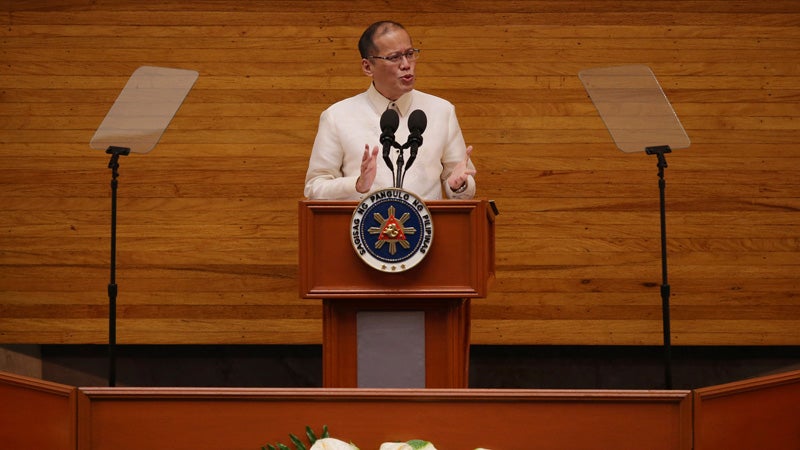 Philippine President Benigno Aquino III gestures as he delivers his 5th State of the Nation Address during the joint session of the 16th Congress at the House of Representatives in suburban Quezon city, north of Manila, Philippines, Monday July 28, 2014. (AP Photo/Aaron Favila)

MANILA, Philippines— President Benigno Aquino III’s fifth State of the Nation Address (Sona) drew mixed reactions from the business community on Monday, as some of the country’s chief executives saw it more as a review of the past, than a preview of his concrete plans for the future.

Sergio R. Ortiz-Luis Jr., president of the Philippine Exporters Confederation Inc. (Philexport), noted that the Sona was well-prepared, very inspiring, and emotional, but did not tackle the pressing problems faced by the business community.

“Certainly, he was able to enumerate the gains made (by the administration over the past years), except that my expectation is different. I had hoped to hear more concrete solutions to the power situation, a clearer direction for the PPP (public-private partnership program) and the port congestion,” Ortiz-Luis explained.

“I am not sure if those things should be said in the Sona but I had hoped he would touch on it. As an exporter, I am hopeful to hear about the more pressing issues. It was more of the past than the future, but still very inspiring to the point that a lot got teary-eyed, especially after seeing (President Aquino’s youngest sister) Kris cry. But it was ok, he was able to cover many (fronts),” he added.

Peter V. Perfecto, executive director of the Makati Business Club (MBC), commented that the “president chose to give his bosses a full account of what they have accomplished so far amidst all the noise being created that their promises have not been kept.”

“We applaud the President’s reaffirmation that the Filipino is worth dying for, living for and fighting for. That gives us all hope that the reforms will continue, that good governance will continue and that inclusive growth will continue to be pursued. The business sector sent its recommendations for his last two years and we remain optimistic that, though not mentioned in the Sona speech, the government will listen and deliver,” Perfecto said.

For John D. Forbes, senior adviser at the American Chamber of Commerce of the Philippines (Amcham), the Sona was said to be “very much in the president’s style, describing specific project and program accomplishments, and only a handful of legislative proposals.”

“We expect his reforms to continue until his last month in office. The 3.5% of GDP level spending on infrastructure is a good move towards the 5 percent target by 2016,” Forbes explained.

Forbes, however, noted that President Aquino was not able to “inform the country with details on the power sector. He could have listed more bills he intends to prioritize.”

“The central message is his continuing commitment to better the lives of Filipinos as he seeks a higher national budget for 2016. This time, he hinted that he will henceforth observe budgetary procedures as he will seek Congress approval for supplementary budgets,” Lacson said.

Abad to ask Congress to clarify definition of savings