MANILA, Philippines—While electricity has been restored at the distribution level for most of Metro Manila and nearby provinces affected by Typhoon “Glenda,” the power supply situation remains tight for the Luzon grid, prompting experts to hoist a “yellow alert” over the island. 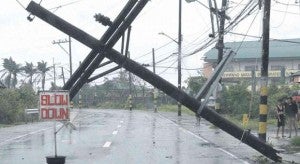 An electric post is toppled at the height of Typhoon “Glenda” (international name: Rammasun) in Noveleta, Cavite province. The typhoon led to power outages affecting a total of 13.5 million people in Luzon, including Metro Manila, and the Visayas. EDWIN BACASMAS

This means areas in the Luzon grid could still experience power outages on Sunday and anytime a major power plant shuts down this week.

“We are on yellow alert on Sunday to Friday, except Monday where we will be on red alert,” Energy Secretary Jericho Petilla said in a text message on Saturday. He said power demand was expected to be higher on Monday while at least two major power stations remained shut.

The 1,271-megawatt Ilijan natural gas-fired power plant in Batangas City, which resumed supplying the Luzon grid on Friday, was back at full capacity by Saturday, said Mylene C. Capongcol, director of the Department of Energy’s Power Industry Management Bureau.

However, the 511-MW Quezon Power coal-fired plant in that province and the 530-MW San Lorenzo natural gas-fired power plant in Batangas had not resumed deliveries to the Luzon grid.

The National Grid Corp. of the Philippines confirmed that a yellow alert, at best, was expected for the Luzon grid throughout the week.

Distribution utility Manila Electric Co. (Meralco), for its part, said most of its customers had their power restored as of Saturday even as circuit repairs in “isolated” cases continued.

Meralco said that as of Saturday afternoon, 87.25 percent of its franchise area had power.

In Metro Manila, 2.64 percent of its customers were still experiencing brownouts.

4.6M Meralco customers without electricity due to ‘Glenda’

Read Next
How restaurants survive without depending on walk-ins
EDITORS' PICK
World-standard accounting: Unlocking your financial potential
Defend Your Health! Shop health essentials from home with Rose Pharmacy’s Online Sale
Chatting with companions, answering calls on MRT 3 trains banned
Water remains our saving grace right now
COVID-19 wards in 2 more hospitals reach full capacity
Navotas will be on lockdown from July 16 to 29 – Tiangco
MOST READ
‘I am not my father,’ says daughter of lawmaker who voted to deny ABS-CBN franchise
In slap on face of PH, China replies to Locsin on tribunal ruling: It’s invalid
Vilma Santos-Recto ‘prepared’ to face ‘consequences’ over ABS-CBN franchise vote
Did a meme get on Agot Isidro’s nerves? She’s asking ’24 Oras’ to fact-check it
Don't miss out on the latest news and information.