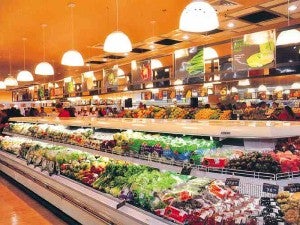 MANILA, Philippines — The Department of Trade and Industry has issued “show cause orders” to 64 supermarkets and wet market stalls in Metro Manila for selling basic goods and prime commodities at prices higher than the approved suggested retail prices (SRPs).

The stores that have allegedly violated the Price Act (Republic Act No. 7581) included some of the biggest names in this industry, such as Puregold (Sta. Ana, Pasay, Las Piñas, Monumento and  Valenzuela); SM Hypermarket Las Piñas; SM Supermarket Makati; Rustan’s Supermarket Quezon City; Robinsons Supermarket Malabon; Starmall Alabang; and Fisher Mall, among others.

“These retailers (were found) selling non-agricultural basic necessities and prime commodities at 40 centavos to P13 above the SRPs, which prompted the DTI, to immediately take action by issuing them SCOs to make them explain the high prices on their products,” said Trade Undersecretary Victorio Mario A. Dimagiba.

Dimagiba stressed that the DTI only approved price increases of up to 7 percent for processed milk, which took effect last July 1.

“As for other non-agricultural basic and prime goods, their SRPs should remain the same. Therefore, we are enjoining all retailers to check their prices and make sure that these are conforming to the set SRPs,” Dimagiba further said.

The price monitoring teams from the STI went around the cities of Manila, Las Piñas, Muntinlupa, Mandaluyong, Quezon, Malabon, Valenzuela, and Caloocan and monitored a total of 121 stores including 63 supermarkets, and 58 stalls in 21 wet markets. The price monitoring reports covered the period July 7 to 11.

Under the Price Act, penalties for illegal price manipulation such as profiteering included imprisonment from five years to 15 years, and administrative fine of P5,000 up to P1 million.

On another development, the DTI said it was investigating three importers of plywood, steel angle bars and helmets for use of counterfeit conditional releases and Import Commodity Clearance (ICC) certificates.

These companies were identified by the DTI as Archer Blaze Marketing, Bandini Trading, and Real Top Enterprises.

“In an attempt to release shipments of motorcycle helmets, Real Top Enterprises used a counterfeit ICC certificate which was allegedly signed by a former director, who has been separated from government service since May of 2013,” the DTI reported.

“Archer Blaze Marketing and Bandini Trading, on the other hand, used fake conditional releases which were allegedly signed by another director to discharge imported equal leg angle bars and plywood, respectively,” it added.