How to learn best? Relax and get some sleep | Inquirer Business

How to learn best? Relax and get some sleep 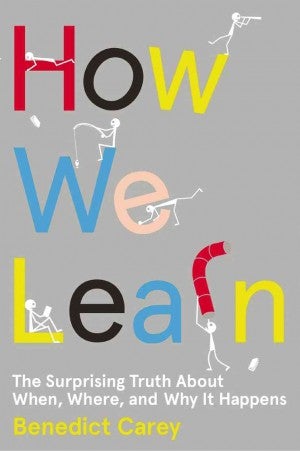 ‘HOW We Learn‘ By Benedict Carey Random House, 2014

So it is true—we just have no names for our learning techniques!

Five years ago, when I had a comprehensive exam for my doctorate a week after, I studied two hours one night, and another two hours the next night. My classmates told our professors, “We are worried about Dante; he is not joining us for an all-night review! In all four subjects, I got “high pass.”

This is what the book “How We Learn” calls it. You learn more when you give your brain some “space” to absorb more. Then move on to absorb more facts and figures.

You have a book on algorithmic trading to absorb over the weekend, but the material is a tough one to make sense of. What will you do? Will you tough it out; after all, nobody said the stuff is easy. No, say learning scientists! Take the work somewhere else.

The book, authored by award-winning science reporter of the New York Times Benedict Carey, says that learning happens best when “you change locations.”

Now I know why our best insights happen in noisy coffee shops or under a lukewarm shower!

Now we know how Archimedes discovered the principle of buoyancy—in a bathtub full of water—and exclaimed the now memorable “eureka!”

This explains, as legends have it, why Sir Isaac Newton, relaxing under the tree—and not bent over in a non-stop study—discovered and explained the universal law of gravity. In reality, the apple did not fall on Newton’s head. He saw the fruit fall from his house garden—and set him off into thinking!

This book is about the most mysterious part of the human body—the brain.

“The brain is not like a muscle, at least not in any straightforward sense. It is something else altogether sensitive to mood, to timing, to circadian rhythms, as well as to location, environment,” Carey explains, quoting cognitive scientists.

The brain “registers far more than we’re conscious of. And often add previously unnoticed derails when revisiting a memory or learned fact,” reveals the author. “It works hard at night, during sleep, searching for hidden links and deeper significance in the day’s events.”

The brain is not only a super collector of facts and figures. It seeks significance. “It has a strong preference for meaning over randomness, and finds nonsense offensive.”

The author points out that we must move basic biology to cognitive science in order to understand how the brain works. “This book is a revelation,” says Mary Roach, author of Stiff, after getting a pre-publication of Carey’s book.

“I feel as if I’ve owned a brain for 54 years and only now discovered the operating manual!”

The book, written by a science writer, has four parts: Basic Theory, Retention, Problem Solving, and Trapping the Subconscious.

On Theory, Carey gives us a panorama of studies made by cognitive scientists, zooms our attention on the parts of the brain—like the nucleus, cell body, axon and dendrites. He regales us about brain functions—premotor functions, mo  tor functions, visual processing, language comprehension, auditory processing, and planning and decision making.

He brings us to the advances of science about memory, forgetting, retention. He subscribes to the theory that the brain has specific areas for remembering, and points out that forgetting should be welcome because it is part of learning.

Previous theories said that one part of the brain comes to the rescue for retention when one part’s ability to remember is impaired. He says, no. Each part has a specific role to play.

He cites the “Forget to Learn Theory,” saying “Forgetting is the best friend of learning, not its rival.  Forgetting a huge chunk of what we’ve just learned, especially when it’s a brand-new topic, is not necessarily evidence of laziness, attention deficits, or a faulty character. On the contrary, it is a sign that the brain is working as it should.

Forgetting a minor detail is understandable, the book says, saying the brain retains what is significant. That explains why you forget where you placed your car keys, but you don’t forget that the poet who wrote “Invictus” is William Ernest Henley.

Don’t say that you forget the date of your wedding anniversary, and yet you remember that Magellan re-discovered the Philippines on March 16, 1521!

Walking down memory lane, when you revisit a place, aids memory. Psychologists D. R. Godden and A. D. Baddeley tested the hypothesis that many learning theorists favored: that people remember more of what they studied when they return to that same study environment.

A very useful advice is a chapter on “Spacing Out,” which is taking advantage of breaking up study time. I should have advised Bar reviewing graduates that “distributed learning”—or the spacing effect—makes them retain more of jurisprudence over the years!

“Mom’s right,” Carey beams: “It is better to do a little today and little tomorrow rather than everything at once.  Not just better. A lot better.”

On gathering insights or stumbling over bright ideas, the book says something about “incubation.” It is a break that begins at the moment we hit an impasse and stop working on a problem directly—and ends with a breakthrough. The book offers a scientific explanation to the aha! Insight.

What this book reveals is what we have known all along—those of you who did not follow the advice of non-stop learning, of concentrated study when the spirit is willing but the flesh is weak, and of burning the midnight candle.

The book simply validates what the brighter students have known, and have been doing. They are so relaxed when they study. They sleep well, and when the first morning of the exams comes, they are fully invigorated, they have full command of all their senses—and their brain is working wondrously, magically.

How to learn best? Relax and get some sleep. Renew your brain. Release undiscovered mind power! [email protected]