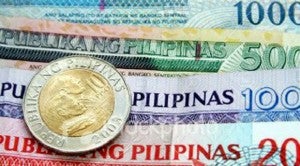 The anticipated increase in overnight borrowing rate this week could bode well for the local currency, a research note from Deutsche Bank said.

MANILA, Philippines–The Bangko Sentral ng Pilipinas may increase its overnight borrowing rate as early as this week as part of the process of “normalizing” record-low local interest rates, which in turn could bode well for the local currency, a research note from Deutsche Bank said.

Based on a June 13 regional markets study, Deutsche Bank that said within this third quarter of the year, the BSP’s overnight borrowing rate may be increased by 50 basis points from 3.5 percent to 4 percent. The next increase of a quarter-percentage point was seen by the second quarter of 2015.

“In addition to Philippines’ constructive external balances, we have been positive on the Philippine peso due to the ongoing shift in monetary policy,” said the study, which is authored by Singapore-based analyst Mallika Sachdeva.

The bank expects the peso to end this year at P43.80 and next year at P44 against the US dollar.

The bank noted that the Philippines had only just begun the process of “reining in long-standing over-easy policy, and likely has a lot to go on multiple monetary levers,” starting with the increase in the reserve requirement ratios twice this year, which should help to curb local currency liquidity.

However, it noted that the BSP’s overnight policy rates remained at all-time lows and the special deposit account (SDA) rates have yet to be normalized.

“Philippines is in fact the only place in Asia where rates remain at post-crisis lows. To the extent that excessive local currency liquidity and easy monetary policy added to Philippine peso’s underperformance last year, tightening should now be supportive for the currency,” the bank said.

The research note said the central bank intervention was a “potentially frustrating” factor for Philippine peso gains, suspecting the BSP’s moves between the 43-44 handle over the last 12 months to stem gains.

“Over the past two months, evidence of small reserves accumulation suggests BSP may be intervening to hold the line above the 43.50 level,” it said.

Deutsche Bank said there were a number of reasons to believe that the BSP would ultimately become more accommodative of gains.

With the significant pickup in inflation in recent months, for instance, Deutsche Bank said a stronger currency could be a potentially useful tool to moderate imported inflation and compensate for rising domestic pressure.

Second, the bank said there should be less concerns about competitiveness losses, given the gains in Indian rupee—India being an outsourcing business rival—and other emerging Asian currencies over the past nine months.

Third, the bank said there could be concerns about BSP’s capital position, noting this had been eroded to “weak” levels and “could come under more strain if and once SDA rates are hiked.”

“It was perhaps the need to protect their net equity position that led to a change in SDA accessibility rules last year, releasing large amounts of peso liquidity into system. Given that the costs of reserves management will remain a consideration, reducing reserves accumulation may be a required resort,” it said.

Lastly, Deutsche Bank also noted that the Philippines’ portfolio flow position appeared to be improving after dramatic outflows from bonds between December 2013 and March 2014.