MANILA, Philippines—The government has opposed the exclusion of former Finance Undersecretary Antonio Belicena from the 550 criminal cases filed in connection with the P5.3-billion tax credit certificate (TCC) scam despite a claim by doctors that he is unfit to stand trial due to a mental disorder. 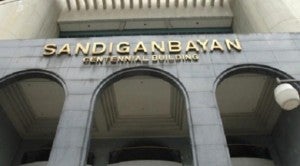 In a three-page joint opposition filed in the Sandiganbayan’s Second Division, State Prosecutors Alma Avanza, Jennifer Agustin and Annielyn Medes-Cabelis of the Office of the Ombudsman said Belicena’s lawyer, Jose Flaminiano, failed to observe the Rules of Court when he filed the motion to terminate, suspend or archive the cases against Belicena on May 23.

The Rules of Court provide that mental and physical exams may be ordered by the court in which the action is pending.

Also, the order for examination “may be made only on motion for good cause shown and upon notice to the party to be examined and to all other parties,” the prosecutors said.

Belicena’s lawyer only presented a four-page report signed by five doctors from the National Center for Mental Health (NCMH) that said that Belicena, 81, was suffering from dementia, which is characterized by impairment in memory, orientation and judgment.

The report declared Belicena to be “incompetent to stand the rigors of a court trial.”

Incapable to testify in court

“Although the patient has demonstrated an appreciation of the charges against him and of the possible consequences of his cases, it is our opinion that his impairments in cognition will render him incapable to testify in court,” read the report of the medical team led by Dr. Edison C. Galindez, chief of NCMH’s forensic psychiatry section.

The prosecution, however, said the action taken by the defense of allowing Belicena to be examined by NCMH doctors without informing the court and the prosecutors was “premature.”

“It deprived this honorable court of making a ruling on whether or not it would be necessary to conduct a physical and mental examination of the accused as required under the Rules of Court,” the prosecutors said.

They said the advice was necessary to ensure that the medical exam results submitted to the court were not biased in favor of the accused.

Belicena, who used to head the Department of Finance’s One-Stop Shop Inter-Agency Tax Credit and Duty Drawback Center (OSS-Center) during the Ramos administration, faces multiple suits in connection with the TCC scam from 1995 to 1998.

TCCs are government refunds of duties and taxes given to manufacturing companies that produce local goods for export.

The medical report was attached by Flaminiano to the motion that he filed in the Sandiganbayan’s Second Division seeking to terminate, suspend or archive 47 charges against Belicena.

Belicena’s medical evaluation was ordered by the court’s First Division in 2013 to determine his fitness to stand trial on all the charges.

Flaminiano said there were still 550 cases, including for graft, estafa and falsification of public documents, against his client pending in all five divisions of the antigraft court.

Between P5.3 billion and P6 billion worth of illegal TCCs were issued by the OSS-Center before the scam was uncovered during a 1998 Senate investigation. Since 1999, over 700 cases have been filed in court in connection with the TCC scam.

Wuhan nurse shaves head to aid her work against virus