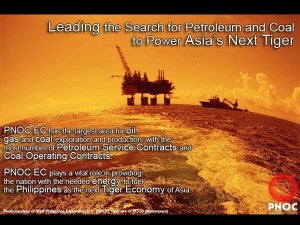 A consortium led by the state-run Philippine National Oil Company-Exploration Corp. (PNOC-EC) has embarked on a $22-million energy exploration project off the western coast of Palawan, which is “estimated to contain oil-in-place volumes of [up] to 676 million barrels, and an upside potential of 977 million barrels.”

Should the consortium succeed in drawing oil from Baragatan, it could supply roughly 10 percent of the country’s crude oil consumption, he noted.

PNOC-EC is “confident that [it] will strike oil” in the 20 square-kilometer Baragatan prospect—part of the firm’s Service Contract No. 63, Lopez reported in a June 2 letter to Mr. Aquino, a copy of which was furnished the Inquirer.

He cited a project briefing paper, which showed that the Albion Head 1 well, a 1975 oil drilling operation in the same area, “missed the Baragatan prospect, leaving it untested.”

The prospect is said to “contain thick, mature oil-prone source rocks. These are the same source rocks which have produced the majority of oil and gas discovered offshore in the northwest Palawan basin,” he said.

Lopez said that although the operation would be “costly and risky,” the rewards of attaining success would have “far reaching positive implications economically,” and boost the country’s energy security.

Expense paid for by partners

According to the PNOC-EC head, the company will be “free from any costs” incurred during the initial phase of the oil drilling activity, which started three weeks ago.

Instead, the expenses will be shouldered by its two partners—Nido Petroleum Philippines Pty. Limited, which is listed on the Australian Stock Exchange, and Dragon Oil Plc. based in the United Arab Emirates.

This has been agreed upon by all the members of the consortium, he said.

If the exploration work were to yield positive results, the consortium would perform a few more exploratory and validation drilling activities before it could commercially draw oil from this prospect, Lopez said.

“Oil and gas exploration is truly a very costly and high-risk endeavor,” he said, estimating that the consortium could spend “upwards of $100 million” just to validate the commercial viability of the prospect.

“It is essential, therefore, that the government through PNOC-EC spearhead oil and gas exploration in the country,” he added.

“We at PNOC-EC believe that the Philippines is a country rich in oil and gas.”

In January, Nido Petroleum entered into an agreement with Dragon Oil for the Baragatan project. The partners have already completed the two-phase deal, where Dragon Oil acquired a 40-percent participating interest in SC 63. Nido accounted for 20 percent of the service contract, while PNOC-EC took up the rest.

According to a report, the Department of Energy (DOE) has yet to approve the deal.

The PNOC-EC, incorporated on April 20, 1976, is mandated by the government, through the DOE, to take the lead in the exploration, development and production of the country’s oil, gas and coal resources.

Aside from SC 63, the company has six other petroleum service contracts: SC 37 in the Cagayan Basin; SC 38 in Malampaya, northwestern Palawan; SC 47 off the coast of Mindoro; SC 57 in the Calamian islands group; SC 58 in West Calamian; and SC 59 in west Balabac.

Baragatan, Malampaya, Calamian and Balabac are all in the province of Palawan.

The firm also owns and operates a commercial port, the PNOC-EC Supply Base in Mabini, Batangas, which provides berthing, cargo handling, storage and warehousing facilities to its clients.

PNOC-EC to delist from PSE