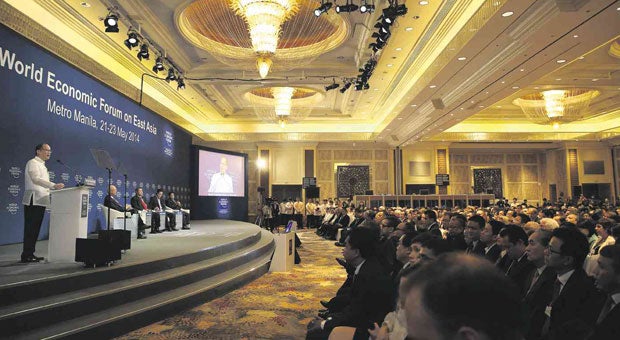 DAVOS IN ASIA President Aquino addresses the 23rd World Economic Forum on East Asia at the Shangri-la Hotel in Makati City on Thursday. Often called Asia’s equivalent of Davos, the meeting serves as an ideal platform for participants to discuss opportunities for the promotion of greater economic inclusion in East Asia and better decision-making in the face of unpredictable and natural economic disruptions. More than 600 leaders from business, government, civil society and academic institutions from 30 countries are taking part in the gathering. MALACAÑANG PHOTO/RYAN LIM

MANILA, Philippines—President Aquino on Thursday shone the spotlight on ordinary Filipinos, paying them the ultimate tribute for the country’s amazing economic run during his speech at the start of the plenary session of the World Economic Forum on East Asia (WEF-EA).

Aquino said it was the collective effort of his countrymen that brought the Philippines to where it is now—“in the midst of a dramatic turnaround in every sector.”

The President also told political and business leaders that achieving inclusive growth—where the benefits of a booming economy could be shared by all—was the “yardstick by which we measure any government undertaking.”

“We are intent on… making certain that each and every Filipino enjoys the full dividends of progress,” he said.

But while Aquino celebrated the ordinary Filipino in his speech, Vietnamese Prime Minister Nguyen Tan Dung used the occasion to draw the delegates’ attention to his own countrymen whom he claimed were driven to acts of violence because of China’s provocative moves in the South China Sea.

As a result, the small Chinese delegation attending the event walked out of the session.

A member of the Chinese delegation told the Inquirer that the group was offended by the Vietnamese prime minister’s remarks, particularly when he brought up the territorial dispute during the economic forum.

Shortly after Dung’s speech, WEF founder and executive chair Klaus Schwab tried to defuse the situation and declared that the forum “is a neutral organization and we don’t take stands.”

“I appeal, on behalf of the World Economic Forum, to all parties to resort to discussions and dialogue to resolve the situation, which has a potential to create a situation we all do not want to have. We are living in a global world, we need global partnerships, we need global peace,” he said.

Solid vote of confidence for PH

During his speech, Aquino highlighted the country’s economic gains under his watch, which, he said, were backed by “the renewed perceptions of the international community.”

The Philippines was easily the star of the so-called “Asia’s Davos,” the country being among the fastest-growing economies in Asia, with a 7.2-percent growth rate last year—all despite calamities such as Super Typhoon Yolanda.

“We are set to build on our momentum and become even more competitive, as our manufacturing sector continues its revival and as we continue to increase our infrastructure spending—more than doubling it, from around P200 billion in 2011 to more than P400 billion in 2014.”

Moving forward, the President said “all signs for the future are pointing upwards,” noting that the Philippines would hit by next year a “demographic sweet spot.” It is characterized by a significant portion of the population joining the labor force while also driving consumption.

“We are incredibly poised to take full advantage of the situation, having made strategic investments in education and skills training, which will equip our future workforce with the correct skills to fill the jobs that are and will be created,” he said.

After Aquino addressed the delegates, Indonesian President Susilo Bambang Yudhoyono took center stage and said that the Philippines’ hosting of the economic forum was a “solid vote of confidence for this country’s economic achievements.”

During the session, Finance Secretary Cesar Purisima told the delegates that the two-pronged approach of the Philippine government in boosting infrastructure would become a global model that other developing countries could emulate.

The two approaches are the public-private partnership (PPP) program, where private enterprises are invited to bid for and invest in public infrastructure projects, and the allocation of consistently increasing national budget to infrastructure.

The government will increase the budget for infrastructure from 2.9 percent of the gross domestic product (GDP) last year and 3.1 percent this year, to 5 percent of GDP by 2016, he said.

Also, he said over P1 trillion worth of infrastructure projects under the PPP program were already in the pipeline.

According to the PPP Center, there are 57 infrastructure projects under the PPP program that are in various stages of implementation.

So far, contracts have already been awarded for seven PPP projects collectively worth P62.6 billion.

“Soon, one can look at the PPP program of the Aquino administration and say that it has been one of the better [economic development] programs not only in the Philippines but in the world,” Purisima said.