Nestlé to double size of facility in PH 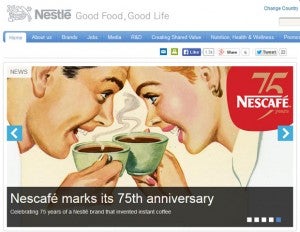 Consumer goods giant Nestlé Philippines will embark on an expansion program to double the size of its existing factory in Tanauan, Batangas, making it one of the largest production facilities of its parent firm, Nestlé SA, in the world.

The Swiss-based conglomerate said it would undertake the expansion because the Philippines now belongs to the top 10 markets of Nestlé’s world, becoming a “prime location” for direct investments.

The Philippines is an “extremely important market,” Nestlé Philippines chair and chief executive John Martin Miller said in an interview on Wednesday.

The expansion will also address the expected rise in domestic consumption, as well as exports.

The P5-billion Tanauan factory currently occupies only about 20 percent of its site at the First Philippine Industrial Park (FPIP), Miller said.

“Clearly, we have that site because we have a view to expand. Within the next five years, we will be embarking on an expansion program on that site, which will certainly see it double in size, and it will see a significant investment, very much in line with the kind of investments that we’ve made in the last couple of years,” Miller explained.

He added that the Tanauan factory would, in the end, become “one of the largest Nestlé production facilities not only in Asia, but possibly in the Nestlé world.”

The company has been in the country for over a hundred years, establishing six factories in the process. The plants are located in Cagayan de Oro in Misamis Oriental; Cabuyao and Canlubang in Laguna; Pulilan in Bulacan; and Tanauan in Batangas.

“I’m pleased to say that all our factories are well utilized. But as we look ahead, we’re working on a strategic plan. We’re very much investing to ensure we meet the demands of the Filipino consumers. We’re well utilized, but we’re planning for further expansion,” he said.

Of the six Nestlé factories, three are exporting goods not only to Southeast Asia, but also to South Africa and Europe. The Lipa facility exports cereal products, while the factories in Cabuyao and Canlubang ship out infant milk products.

“At the moment, we’re exporting to dozens of countries. Will there be other countries … in the future? There probably will be…. We are one of the most efficient producers in the Nestlé world because of our high volumes, and that means our cost of production is very competitive,” Miller noted.

Only 5 percent of the Nestlé goods produced here are being exported, while the remaining 95 percent are consumed locally.

The domestic market, he added, is what’s driving the company’s expansion program in the Philippines.

According to Miller, now is a great time for business in the Philippines, given the country’s strong economic growth, which stood at 7.2 percent last year, good governance and the reforms being implemented, and the opportunities presented by the forthcoming integration of the Asean economies.

Also, the Philippine government has already done “a great deal” to maximize the opportunities presented by the country’s economic momentum, but more programs and initiatives will help further drive growth, Miller said.

“This is a government that is clearly pro-business, and one that wants to encourage economic growth. That’s a good climate for any company,” he added.