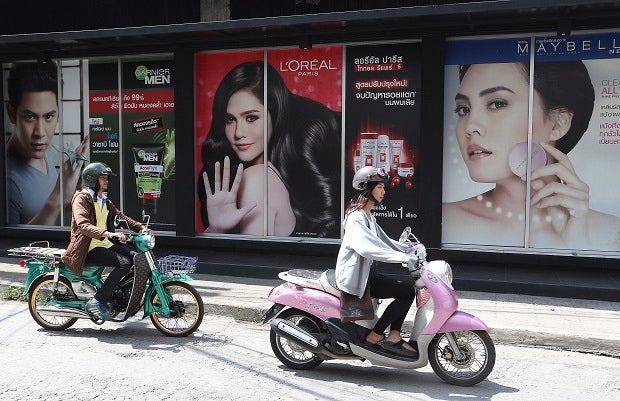 Two motorcyclists ride past cosmetic advertisement signs in downtown Chiang Mai, northern Thailand, Monday, May 19, 2014. Thailand’s economy contracted by 2.1 percent in the first quarter, slammed by a protracted political crisis that is likely to slow growth for the rest of the year. AP

HONG KONG — Thailand’s stock market and currency fell Tuesday after the military declared martial law in what it called an attempt to stabilize the country’s precarious political situation.

The move, which the military insists is not a coup, follows months of anti-government demonstrations and a refusal by the caretaker prime minister to step down.

The unrest has hurt the Thai economy, which shrank 2.1 percent in the first quarter from the fourth quarter, according to data released Monday.

Benchmark crude oil for June delivery was up 9 cents to $102.20 in electronic trading on the New York Mercantile Exchange. The contract rose 53 cents to settle at $102.11 on Monday.