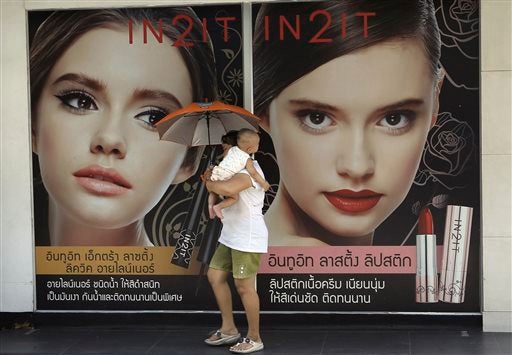 A woman and her child walks past cosmetic advertisement signs in downtown Chiang Mai, northern Thailand, Monday, May 19, 2014. Thailand’s economy contracted by 2.1 percent in the first quarter, slammed by a protracted political crisis that is likely to slow growth for the rest of the year. AP

BANGKOK— Thailand’s economy contracted by 2.1 percent in the first quarter, slammed by a protracted political crisis that is likely to slow growth for the rest of the year.

The National Economic and Social Development Board said Monday that consumer confidence declined as a result of political unrest, reducing domestic demand compared with the fourth quarter of last year.

Thailand has been hit by six months of anti-government protests that have shut down parts of Bangkok for weeks at a time and spawned violence in which 28 people have died and more than 800 have been injured.

The planning agency predicted the Thai economy, which is Southeast Asia’s second largest, would grow by 1.5 to 2.5 percent in 2014, lower than the 3 to 4 percent growth it had forecast in February.

Known mainly for its southern resort islands and high quality rice, Thailand is also a manufacturing base for electronics manufacturers and several global automakers, including General Motors Co. and Toyota Motor Corp.

Earlier this month, the country’s political crisis deepened after the Constitutional Court removed caretaker Prime Minister Yingluck Shinawatra for nepotism along with nine Cabinet members in a case that many viewed as politically motivated. Protesters are now pushing for her successor and the rest of the government to be replaced by an interim administration.

The government has been run by a caretaker Cabinet since Yingluck dissolved Parliament last December in a failed bid to ease the crisis. A new government cannot be named until there are elections, which demonstrators have vowed to obstruct without reform first.

The government report Monday said the political unrest and delays in forming a fully functional government would obstruct budget disbursement in 2014 and preparations for next year’s budget as well. It also said the implementation of key economic measures would be affected and the crisis would “continue to dampen consumer and business confidence and thus private consumption and investment.”

The report also blamed the slow recovery of the global economy for hobbling exports.

With no solution in sight for Thailand, investors look to PH,