Growth in remittances accelerated in March 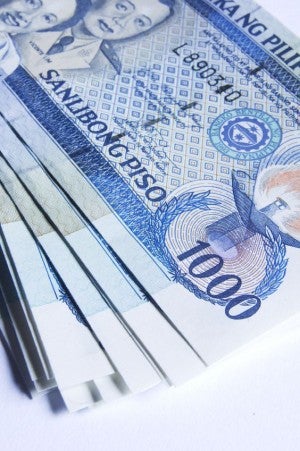 Growth in remittances from the country’s eight to 10 million overseas Filipino workers (OFW) was the fastest so far this year.

“Robust cash transfers in the first quarter of 2014 were supported by the sustained demand for skilled Filipino manpower,” the Bangko Sentral ng Pilipinas (BSP) said.

Cash remittances in March rose by 6.5 percent year-on-year to $1.88 billion.

The growth rate for the month was the fastest so far this year.

For the first quarter, cash transfers were up 6 percent to a total of $5.47 billion.

Remittances are the economy’s largest source of dollar income.

These cash transfers are also a major driver of domestic consumption.

A quarter of these processed job orders were for workers in the service, production, and professional, technical sectors.

Remittances from seafarers grew by 10.9 percent in the first quarter.

Remittances from land-based workers were up 4.5 percent in the same period.

The BSP said the expansion of local banks’ reach overseas through partnerships with money transfer agents and foreign financial institutions contributed to the increase in cash sent to the Philippines.

The government expects remittances to grow by 5 percent this year, slower than last year’s pace of 7.4 percent.

Read Next
CebuPac Q1 profit plunges
EDITORS' PICK
Pre-order the new vivo Y20s [G] to get a free TWS earphone
In good spirits: SMDC helps farmers and residents through Kadiwa Market
DSWD chief admits ‘slow start’ in distribution of aid in ‘NCR Plus’
65% of Filipinos say Duterte’s health should be made public – SWS
Smart three-peats as country’s fastest mobile network – Ookla
Would the military allow me to stay this long if I’m inutile? – Duterte
MOST READ
Vico Sotto frets getting photos of ‘butt vaccination’ from Pasig dwellers
Metro Manila to have shortened curfew hours from 8 p.m. to 5 a.m. under MECQ
San Miguel Corp. continues to invest heavily in the Philippines’ future
COVID-hit Roque slams ‘un-Christian’ query on how fast he secured hospital bed
Don't miss out on the latest news and information.