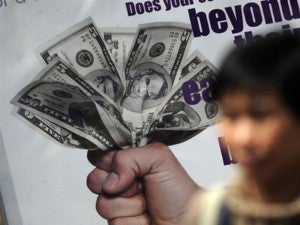 MANILA, Philippines—The Philippines is enjoying a “stable” and “balanced” growth backed by rising consumption and investment spending but its main structural weakness is too much reliance on overseas remittances, the chief economist of regional life insurer AIA Group said.

Brian Murray, in a briefing to investors of Philam Asset Management Inc. Thursday night, said the country could sustain a gross domestic product growth of 6.9 percent this year, coming off a high base of 7.2 percent in 2012.

“Growth is very, very steady,” Murray said, noting that neither inflation nor public sector debt was an issue in the country. “Economic fundamentals are strong.”

He said there was still no credit boom in the country, citing this as a reflection of a cautious banking system.

External accounts were also cited as the envy of any economy, underpinned by a diverse and resilient flow of remittances. He noted that the country’s entire foreign debt stock was now lower than the country’s total foreign reserves while current account surplus remained healthy at $10 billion or 7.4 percent of GDP in 2013.

“Portfolio investments have seen net outflows but foreign direct investment is projected to remain on an upward trend,” Murray said.

But an excessive reliance on remittances, Murray noted, was the country’s structural weakness or Achilles’ heel. Even if these remittances have proven to be a stable source of income for the country and come from diverse geographical sources, making them immune to downturns in certain markets, Murray said there were certain trade-offs.

“Having your family emigrating overseas has an emotional cost,” Murray said.

Aside from the emotional cost, he said, having a big portion of the country’s human capital deployed overseas meant that they will not be at home to man additional manpower requirements of growing industries like business process outsourcing or to man factories to be set up by manufacturers moving out of China (where wages are rising).