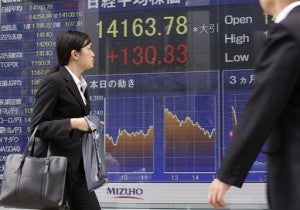 HONG KONG—Asian stocks rose Thursday, buoyed by the Fed chief’s comments that the US is on track for solid growth in the second quarter and positive trade data from China.

Markets took heart after Federal Reserve Chair Janet Yellen told Congress the US economy was on track for “solid growth” in the second quarter and that the stimulus taper would continue steadily.

“It has been a fairly busy day in Asia, with investors focusing on Australian jobs and China trade balance data,” said IG market strategist Stan Shamu.

Chinese stocks rose after the release of April trade data, which showed exports and imports rising marginally, rebounding from sharp declines the month before, with the country reporting a second straight trade surplus.

The figures come a month after Customs reported that China’s trade volumes fell dramatically in March, which analysts blamed on the continued impact of fake reporting of exports seen in early 2013.

“China’s trade data show signs of recovery but continue to understate the true health of the export sector,” Julian Evans-Pritchard, China economist at Capital Economics in Singapore, wrote in reaction to the April figures.

The figures lifted Shanghai stocks but dealers said uncertainty over the domestic economy may cap gains.

“Trade figures didn’t seem to have any big impact on the market as the rises were mainly driven by small-cap stocks on the main board,” Haitong Securities analyst Zhang Qi told AFP.

“It’s still uncertain whether the recovery in trade will be sustainable,” he said.

Putin also said his troops have pulled back from the border, but both NATO and Washington said there was no evidence of a withdrawal.

The surprise comments, which suggested a potential de-escalation of the conflict that had been building toward war, sent Russia’s stock market soaring while the battered ruble jumped to a five-week high against the dollar.

The dollar was at 101.74 yen in Tokyo, down from 101.87 yen in New York Wednesday afternoon after Yellen’s testimony.

The ECB is widely expected to hold off launching fresh stimulus measures at its monthly meeting Thursday.

Oil prices were lower. The US benchmark, West Texas Intermediate for June delivery, was down 36 cents to $100.41 in afternoon trade while Brent North Sea crude for June eased 50 cents to $107.63 per barrel.