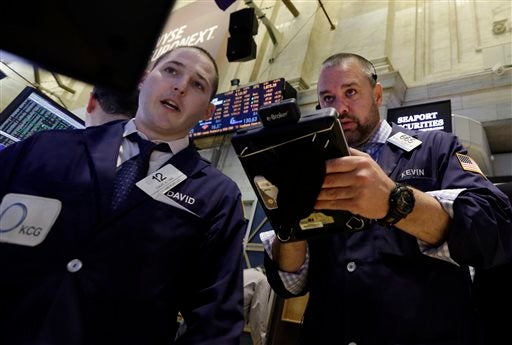 Specialist David Vail, left, and trader Kevin Lodewick work on the floor of the New York Stock Exchange Thursday, April 24, 2014. Mixed earnings from a large number of U.S. companies left the stock market without direction early Thursday, despite positive results from a handful of names including Apple and Caterpillar. AP FILE PHOTO

SAN FRANCISCO– Apple shares on Monday climbed above $600 ahead of a stock split and as the company ramps up its stock buy-back program.

It was the first time that the California company’s stock topped $600 per share since late 2012.

“Maybe the love is for the coming iPhone 6…or the wearable ‘something’ device…or maybe it is just the action of the split and buyback,” Jon Ogg said at stock market specialty website 24/7 Wall Street.

Apple, the largest US company in terms of market capitalization, last month announced quarterly earnings that bested expectations by a wide margin.

It also announced a dividend increase, a ramp-up in stock buybacks and a seven-for-one stock split.

The earnings report came with Apple chief Tim Cook hinting that new products are on the way from the maker of iPhones, iPads, iPods, and Macintosh computers.

Apple will spend an additional $30 billion to buy back shares of the company’s stock, taking to $130 billion how much it plans to spend on repurchases and dividends by the end of next year.

Apple is pouring $90 billion into buying back shares because it believes the stock is undervalued in the market, according to executives.

Apple will raise its quarterly dividend to $3.29 per common share and said it plans to bump up the figure annually.

Its board endorsed a seven-for-one stock split, with each shareholder of record as of June 2 receiving six additional shares for each one they hold.

“We are taking this action to make Apple stock more accessible to a larger number of investors,” Cook added.

A look at the latest Apple-Samsung dispute