To know a country, he has to be ‘part of the flow’ | Inquirer Business

To know a country, he has to be ‘part of the flow’ 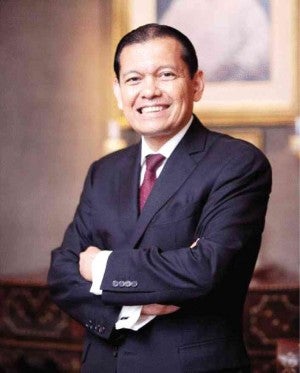 BATARA Sianturi can pass for a local guy, easily blend in with the local crowd and move around incognito

Whenever Batara Sianturi is assigned to a new market, “immersion” is his first order of business. So when the US-educated Indonesian banker was appointed last year as the new chief executive officer of Citi Philippines, he tried a few things that not too many expats would do, like riding the metro railway transit.

This Indonesian banker, after all, could pass for a local guy, easily blend in with the local crowd and move around incognito. Having spent eight years in Eastern Europe, taking the train is likewise “no big deal” for him. Like many local folks, he likes taking a stroll around the shopping malls in the metropolis, to check the standing of Citibank credit cards among merchants. Metro Manila’s bad traffic is not a cause for culture shock, as he had seen worse in Jakarta.

It’s good to be observant in any new country and get the pulse of the consumer, Sianturi says. “You can always get briefing or read but it’s another thing when you immerse,” he says. “I want to have a feel. I want to know the shopping centers and places of interest. Nothing gives you a richer background in addition to what you read and what you’re briefed.” To know the country, he had to be “part of the flow.”

Since arriving in the Philippines in July last year to take charge of the 7,000-staff institution, for example, he lost no time visiting most of Citi’s branches in Metro Manila. He has walked through every single floor in Citi’s head office in Makati as well as the office in Libis, Quezon City, and set meetings to know the bank’s clients and stakeholders in his first 100 days in office.

When he was in MBA school, Sianturi says there was a lot of emphasis on shareholder value. “It’s still important but it’s now expanded. It’s now all about stakeholder value.” In the bigger scheme of things, he says employees, customers, regulators, social organizations, not only shareholders should have their say.

It’s a good time to be back in Asia, says Sianturi, who has been with Citibank for the last 26 years. He was recruited straight out of school in the US and had since then stayed with the American banking giant.

“Asia is booming. It’s an exciting market and Philippines, at the moment, is at an exciting time … It’s always great when you’re riding on an upward growth wave,” he says, noting that since his arrival, the Philippines has obtained three investment grading ratings from all major global rating agencies.

The son of a lawyer, Sianturi left Indonesia after finishing high school in 1978, originally leaning more into the scientific route. In a span of four years, he earned two Bachelor of Science degrees in Chemical Engineering and in Polymer/Macromolecular Science from Case Western Reserve University, as well as a Master of Chemical Engineering degree from Steven’s Institute of Technology.

To obtain two BS degrees in a span of four years, he spent one summer each in three Ivy League universities to get academic credits. For summer courses in Organic Chemistry, he went to Stanford then to Harvard for Micro and Macroeconomics courses and Columbia to study Advance Math and Complex Variables.

After getting these double degrees and Masteral degree, he started doing his PhD program at the Polytechnic Institute of New York University. But by that time, he had become bored with Chemical Engineering and switched to MBA school. He got his MBA degree in Finance from St. John’s University in 1988.

Six months before his graduation from MBA school, he was interviewed by Citibank’s country chief for Indonesia who was visiting Manhattan at that time and immediately got a job offer. As such, he tried working at Citibank Indonesia, at a time when the consumer banking business was just starting. His first assignment was in the auditing division and then transferred to operations, during which he spent six months working in the basement because the bank then was undergoing a comprehensive systems change.

For him, it’s been a “rewarding 26 years in Citi. In 2009, he was named as one of the Top 25 Executives in Indonesia by SWA Magazine and in 2013, was the recipient of the Golden Beehive Memorial Coin Award from the Hungarian Banking Association.

Of all these years in Citi, his first and only institution, he had spent 15 years in Indonesia and 11 years overseas. Before coming to the Philippines, he served as regional head for Hungary and 12 other countries in the Balkan and Baltic Regions in Central Eastern Europe and concurrently as the Citi Country Officer for Citi Hungary. He also spent two years in Australia.

When he first came to Manila, Sianturi was warned by colleagues to watch his weight, because he may not be able to resist palatable local food. The new Citi Philippines chief, however, is a fitness buff—a routine he has acquired since his undergraduate school days in Cleveland, Ohio, where the sprawling campus was very conducive to runners.

Up to these days, he works out every day. He wakes up early—around 5:30 a.m.—then spends about an hour and a half to work out whether in the house, in the gym or running on the street. Weekends are no exception.

“I only do solo sports where I don’t need anybody,” he says, noting while it’s ideal to spend time with friends in athletic activities, this isn’t always practical when one doesn’t have the luxury of time. Thus, running and swimming—sports which he can do on his own—are the thing for him.

Sianturi’s management style is seen as participative. “It takes a team. If you have superstars in the team, count your blessings. It’s better to have a winning team than just a batch of superstars who are not winning,” he says.

“That word ‘we’ is very powerful. So my style is to engage the team, excite the team and make sure the team understands the direction and the vision. To me, vision is very important. You’re the leader, the captain of the team. We should know where we want to go and how to get there. Articulate that to the team: This is where we are against competitors, this is where we want to go in terms of market leadership.”

That it’s all about “we” is, for him, the first key realization as a leader. “It’s not about me. It’s all about the we—the team. Your success depends on your boss, colleague, staff,” he says.

He says a leader also needs huge energy and passion. “If you don’t have the fire in the belly or passion about something, there’s no drive,” he says.

Leading the 112-year-old Citibank Philippine franchise, he says the institution would continue to be part of nation-building, of financial inclusion and ensure that alignment with the three future trends of globalization, urbanization and digitization.

On globalization, he says Citi is the only bank “that can connect the dots” for portfolio and trade flows from development markets to emerging markets and vice versa with its footprint in 111 countries.

On the trend towards urbanization, he says the world will be a collection of cities and Citibank’s presence in over 700 cities gives it a good coverage to serve mega cities.

Citi also aspires to be best digital bank, whether in retail or corporate banking. “The future of banking will be a lot on digital and I think the new generation, the millennials, they are very comfortable not going to the bank. So instead of you going to the branch, we bring the branch to your tablet,” he says.

Asked what has made him stay with Citi for a long time, Sianturi says people stay when they enjoy their work and if the environment is fitting to them.

“I think Citi is for the globally minded professional … Maybe my upbringing of nine years in the States moving from Ohio for undergrad school to New Jersey to graduate school to Brooklyn (New York) for PhD then to Queens for my MBA and then all these going to summer courses made me curious about mobility and globality.”